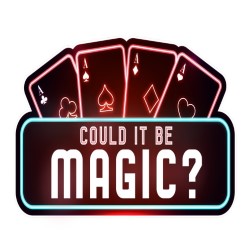 “We have sold over 1200 tickets already from very strong word of mouth and whilst it’s a comedy show the magic has been getting great reactions and gasps and cheers in all the right places.”

WHAT: “In a unique mix of mind-melting magic and bonkers character comedy, one performer plays four contestants in a hilarious and somewhat manic magic competition. This is debut show from Paul Aitchison, as seen/heard performing on BBC Radio 4, West End stages and on your tellybox. Best known to Fringe audiences as co-writer and performer in award-winning sketch act Mixed Doubles (Guardian Top Five recommendation and Dave Comedy Peoples Choice winners). Feel-good comedy meets stupendous sleight of hand, magnificent mind reading, and top draw bamboozlement! It’ll be fun but… Could It Be Magic?”

WHERE: Just the Tonic at The Caves – Just the Fancy Room (Venue 88)

My first Edinburgh was back in 2004. I was performing in our school play that was …inexplicably bought unto the fringe for a week, but I remember having the time of my life and thus knowing that both performing and the Edinburgh Fringe were inevitably going to be part of my future.

I’ve performed in 6 Edinburgh Fringe festivals, usually in Improv/Sketch comedy. For several years as part of “Mixed Doubles” an award-winning Sketch comedy act that did well and performed a few times on radio 4 and toured internationally.

It’s my first year doing a magic show, but as people quickly get once they see the show, the focus is as much on the comedy and audience interaction with the 4 characters as it is the tricks.

The response has been pretty overwhelming. We have sold over 1200 tickets already from very strong word of mouth and whilst it’s a comedy show the magic has been getting great reactions and gasps and cheers in all the right places.

It takes a huge amount of effort to bring a show up to the fringe and doing such a technically complicated show as COULD IT BE MAGIC? even more so. There were many nights this year when I got back late from working in theatre only to then Power up the laptop and pull work til 3am to get it all done. So it’s a great feeling when you see it pay off. As someone who’s experienced both successes and failures in their career – it’s a lovely feeling to see a large queue of people waiting excitedly to see a sold-out show, then realise it’s your show.

Professionally I’ve had some very nice acting jobs come through this year. Some on telly as we speak and others in theatre and a couple to come after the Fringe.

Also getting to put this show on, Something I’ve wanted to do for several years has been a real year highlight.
Going solo is both terrifying and electrifying and there are a few people who have really helped my get to this point.

Including (but not limited to) my wonderful family, Serena Dunn, Jamie Maguniess, John Henry Falle, Chaz Redhead, Will Close and Dianne Roberts. Also, the many magicians who’ve work inspired me to finally do my own.

In my personal life, I got engaged!

I’m proud that the show is pretty novel in concept and execution. I can be confident in saying It’s certainly one of the most unique of the many magic shows on offer at this year’s fringe.

Four Acts present their best 15 minutes of magic to the audience in the hope of winning the immortal trophy. I play all four acts. So there’s lots of quick changes whilst the audience are watching videos introducing the next act. Each act has their own style of magic and humour, so there’s a new energy introduced with each finalist.

The acts this year are:

The Reg kettle, a bitter reject from the working mens club magic circuit now forced to do kids parties. Zantos Thorne, A cocky American mindreader who also sees himself as a Pick-up artist.  Klause Fantastiche, Germanys No1 Illusionist (in his price range) and Famed 1970s TV Double act Colin and Carol.

The aim of the show is to just get the audience to have a really great time and see some unforgettable magic moments.  There are other elements to the show… but those would be spoilers.

I’ve seen some great shows the year, too many to name but: “Boar” is a triumph. Titania Mcgrath’s show is playing on a treacherous satirical cliff edge but writing and performance are sharp enough to navigate it safely though. One never regrets an evening with The Showstoppers. Ever. Algorithms is at serious risk of being the next fleabag Cirque Bezerk is quite something to see. Holy smokes and “Mr thing” is the best way to end a day at the fringe. It’s got everything; games, nonsense, a banging band and a puppet barkeep…who needs more.