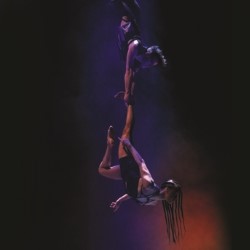 “Just to be here, presenting a show is a triumph. Technical mishaps have led to creative solutions (after initial periods of debilitating stress). Smaller audiences add up to an impressive number over the course of the festival.”

WHO: Gabrielle Martin: Director and Performer

WHAT: “Aerial dance that offers the darkest hour, and questions what it means to carry or let go of another. Two bodies suspended in the limbo of loss, cradled in the surrogate limbs of rope and the temporary solace of flesh, weighed by conscience, spun by dependency, freed by mortality. This new show by Gabrielle Martin (Cirque du Soleil, Cavalia) and Jeremiah Hughes (Cirque du Soleil, Dragone, So You Think You Can Dance) combines an emotionally raw physicality with a haunting original soundscape to create a hypnotic, destabilizing narrative full of mourning, distant hope, and eerie beauty.”

Yes! My experience here seems to be a process of reframing the definition of failure and triumph. Just to be here, presenting a show is a triumph. Technical mishaps have led to creative solutions (after initial periods of debilitating stress). Smaller audiences add up to an impressive number over the course of the festival. Every time I’m biking and it’s NOT raining is a small miracle! Overall, I think there’s an incredible open, optimistic, and alive feeling here.

The show we’re presenting at this year’s Edinburgh Festival Fringe was conceived last summer and so much has come to pass in the year leading up to now. My collaborating partner and I created this show while touring Europe as performers with Cirque du Soleil. We would move to a new city every week and every week we would try to find a new studio to rehearse in. We ended up lost in industrial city outskirts and in studios without heat or air conditioning, often asking ourselves why we were spending our days off in a studio. But something was working because all that spare time spent stuck in confined spaces lead to our engagement and somehow we made a show that’s been nominated for a Total Theatre Award in Physical / Visual Theatre here at the festival.

Limb(e)s was created by myself and Jeremiah Hughes. We met while in the creation for TORUK, a show by Cirque du Soleil, and immediately gravitated towards each other as the only artists on the show with a dance background. We often felt we had more to express as performers and creators and needed to an opportunity see if that was true or not! We couldn’t afford a lighting designer so Jeremiah tried a first stab at it, and when we premiered the work last month at the Montreal Complètement Cirque Festival, the main feedback we received was that no one could actually see what was happening on stage (but we trust they would have loved it, had they seen it!). So in some ways, the real reveal has been here at the Fringe, and from lemons to lemonade the biggest feedback we get now is how incredible the lighting design and aesthetic of the work is! As for future plans, we do not have any dates booked and are not sure whether that’s a blessing or a curse due to the exacting nature of the work!

“Lucille and Cecilia” because it’s also a circus-inspired duet, equally dark, but much more witty!
“Goliath in the water” because it’s kinetic and shares themes of the loss and fragility!