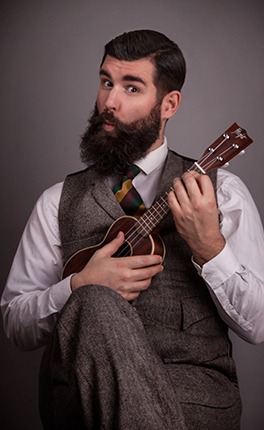 “The Quarry Theatre and garden are an absolute pleasure to perform in and watch shows at (and they are only a 10 minute walk from my house) so I’m looking forward to seeing some great shows this year.”

WHAT: “Bedford’s own viral star returns to Bedfringe. With over 140,000 subscribers and over 8 million views of his notorious, sweary classic ‘I’ve No More …. To Give’ on YouTube alone, Thomas will be bringing his banjolele for a mix of (radio friendly versions of) his original satirical songs and sing-a-long classics.”

I first performed at Bedfringe 2019, but, as a Bedford resident, I’ve been a punter for years. It’s a great event showcasing some fantastic local, national and international acts. I must admit, as a performer, I’m fairly new to the whole festival circuit, however, as a punter, a great location is key. The Quarry Theatre and garden are an absolute pleasure to perform in and watch shows at (and they are only a 10 minute walk from my house) so I’m looking forward to seeing some great shows this year.

Well, 2019 seems like a lifetime ago and I’ve only had a handful of gigs in front of ‘real’ audiences since then! Like many other artists, over 2020/21 I have been doing a lot of online shows and have become very good at performing to a camera, keeping my gaze to a fixed point and not leaving any awkward silence between songs (as a performer you get used to leaving space for applause, however, social media doesn’t have a function for that yet!) I’ve definitely got better at dealing with my own tech, however, I’m very much looking forward to someone else handling that side of things again!

This will be my first show in front of an audience since December 2019, so expect me to be rather excitable! I’ll be performing a family friendly, Thomas Benjamin Wild Esq. set (don’t worry, I’ll be doing a version of ‘that’ song) which will include some singalong classics as well as songs from my 2nd album which I have not yet had the opportunity to play to people face to face yet! I may even be playing some brand new songs for the first time as well.

I definitely think people should try and catch the excellent Dave Alnwick’s Nightmare Magic show. I performed with Dave at the 2019 opening show and he was fabulous! Also, my good friend Sparky TKO is always great, and I’ll also be trying to catch some of the Blender Takeover shows, including the wonderful Danni Nicholls and Richie Prynne.