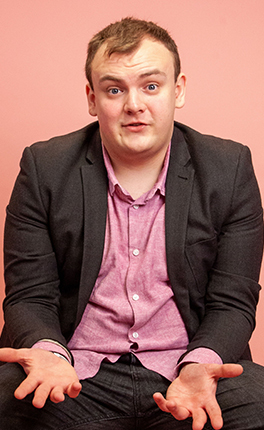 “This is my second time performing at Bedfringe after I had such a great time in 2019. That first year was a bit of an unknown but the support from the festival was brilliant and I got two lovely audiences in for both showings.”

WHAT: “Sex, Spreadsheets and Revolution. Andrew White promises it all in this hilarious new show spilling all the secrets of the widely whispered about “gay agenda” – is it as evil as the conspiracists claim? What is the anthem for this LGBT takeover? And will there be biscuits? (All sexualities welcome; there MIGHT be biscuits)”

This is my second time performing at Bedfringe after I had such a great time in 2019. That first year was a bit of an unknown but the support from the festival was brilliant and I got two lovely audiences in for both showings. I don’t exactly have a massive profile, so to know there’s a willing and open-minded audience who will go see things from people they’ve not heard of is a delight!

My last show had a projector, screen and a few heavy props that were not fun to carry around! I had resolved to strip it all back this year, but I’m slowly building up a list of things I’d actually quite like to include… In a normal comedy club you don’t get as much freedom to play about with things, so although my backpack may be heavy again, I think I’m happy to ignore that 2019 lesson in favour of some creative messing about.

The Gay Agenda LIVE! is a tongue-in-cheek look at sexuality, spreadsheets and revolution. It mainly revolves around my desire to be more active in activism contrasted against a desire to not rock the boat and fill in forms effeciently. Can the two be married? Is a protest song the best medium to contribute to “the revolution”? And am I gay enough to be a gay icon?

The topics sound heavy, but it’s all dealt with in a very silly and light-hearted matter that I hope people can relate to, no matter their backgrounds. Plus, there is a loop-pedal based observational comedy routine, some musical flair, and a lot of biscuit chat… Something for everyone!

I’ve worked a lot with Patrick Monahan over lockdown doing Zoom comedy shows and he is just so good. Such great company and brilliantly funny – go watch him on the 1st August.

My very good friend Max Fulham is doing ‘An Extraordinary Evening’ of comedy ventriloquism & mind-reading with Matt Daniel-Baker. If you have younger family members the show is perfect to take them to, or just superb for all ages anyway if you’re attending without the kids.

Plus, just take a punt on things that look interesting! That’s the best part of a fringe festival