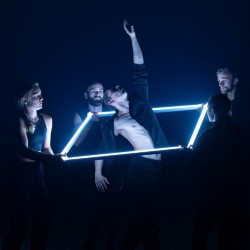 “Edinburgh is one of my favourite cities in the world and I don’t think there’s anything quite like Fringe time. We miss it!”

WHAT: “Envisioning a world of impermanence and shifting atmospheres amongst different patterns of sound, light, and movement, Spaces Between Us and Satori is an approachable, sensitive, and moving double bill of contemporary dance by acclaimed Australian choreographer, Lewis Major. Imagining a system where things are kept suspended and in movement by each element’s own gravitational fields and contending forces, the dancers and their stories form the locus, generating their own rhythms and luminosity.”

No, although it’s the first time presenting digitally. I’ve been very fortunate to spend a few summers in Edinburgh performing in other shows, although I’ve also headed up just to take in the incredible experience of the festival. I’ve often rocked up in the last part of the month, put out a call to friends to see what is worth catching, then spending a week taking in 4 or 5 shows a day. Edinburgh is one of my favourite cities in the world and I don’t think there’s anything quite like Fringe time. We miss it!

Always, always be ready to pivot – on a dime if necessary. The world is still in turmoil and even as we seem to start to get a hold of things, it’s been shown time and time again that those artists flexible enough to change things on the fly will be the ones to survive and thrive. Also, we should be kinder to each other.

Spaces Between Us, the first half of our show, is about a number of things. Firstly, the physical distance that separates people – whether they are kept apart by work, geography, or a global pandemic – and how that affects a relationship. It’s also about the gulf in understanding between people, empathetically, emotionally, or otherwise, what happens when someone wants something that the other person doesn’t and how that interrelation between people plays out. It’s a deeply personal piece born out of the Covid crisis but connected to daily life also. Satori on the other hand is about as pure a dance piece as I’ve ever made. Based on the idea of impermanence and constant flux, we’ve used the juxtaposition of these very straight, very stark lighting tubes and the fluid, rolling, flowing choreography of the dancers to suggest ethereal beauty and universal rhythms of the universe seen in a non-specific, very suggestive way. This is a premiere for Edinburgh Festival made possible by the incredible crew at Black Box Live, though we’re taking it on tour in Australia very shortly.

You must see all of the shows that Black Box Live is presenting but especially Egg by my dear friend Erin Fowler and The Girl Who Jumped Off The Hollywood Sign by Joanne Hartstone. I’d also highly recommend Botis Seva’s BLCKDOG and T.H.E. from Singapore and their show Pan.