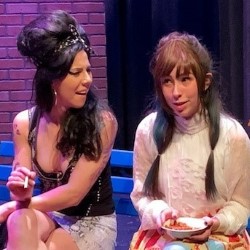 “The magical thing about fringe is for so many of us, once we attend or become involved in any way, the urge to put up your own work becomes not only irresistible, but it doesn’t seem so impossible any more.”

WHAT: “Deena MP Ronayne’s award-winning debut as a writer takes audiences on an emotional journey ranging from fear and hate to delight and joy. Seeking Dignity is a suspenseful drama with a twist in its tail; Close To Black sees two young women who meet as strangers, but discover they have a lot in common; and Tango-ed Web is a laugh-out-loud black comedy about fatal attraction. Filmed live and fully-staged in an empty Aberdeen Community Theatre (South Dakota), the plays are captioned throughout.”

I am ‘attending’ virtually this year. I visited Edinburgh for the first time as a tourist in 2011 and I attended the EdFringe for the first time in 2018 as a scouting producer, disguised as a tourist! At that time, I had just produced my first show at the Orlando Fringe Festival (‘Shakespeare’s Ghostbusters’), so I was delighted to be present at EdFringe. What I loved the most was all the street performances and how easy it was to connect with other artists. The magical thing about fringe is for so many of us, once we attend or become involved in any way, the urge to put up your own work becomes not only irresistible, but it doesn’t seem so impossible any more.

I am producing my show through my company, Hardly Working Promotions LL, and it is also the first play I have written. It is called ‘Triple Bypass: Three Ten Minute Plays About Living for Death & Dying for Life’. It consists of one heavy drama, one fan fiction, and one comedy, all with a different take on life and death. There are trigger warnings, because it deals with some heavy issues, but it ends with the light-hearted comedy that hopefully leaves audience members with overall enjoyment. This show has gone through nine virtual festivals before EdFringe, picking up three awards in the process (Most Viewed – Elgin Winter Fest, Producers Award – Front Row Fringe, Spirit of the Fringe Never in a Box – Front Row Fringe) and after EdFringe, it will be available virtually through The Boulder Fringe, The St Lou Fringe, The Lahti Fringe, and The Melbourne Fringe. My hope is to bring this show to several festivals live with local cast and crew members in 2022, including Edinburgh. I encourage everyone to please feel free to contact me if you are interested in being involved in one of the live productions in the future.

There are so many great options for shows produced, performed and written by women this year. Check out ‘Afterparty’, ‘Hitler’s Tasters’ and ‘Sweet FA’ for some women empowered work!