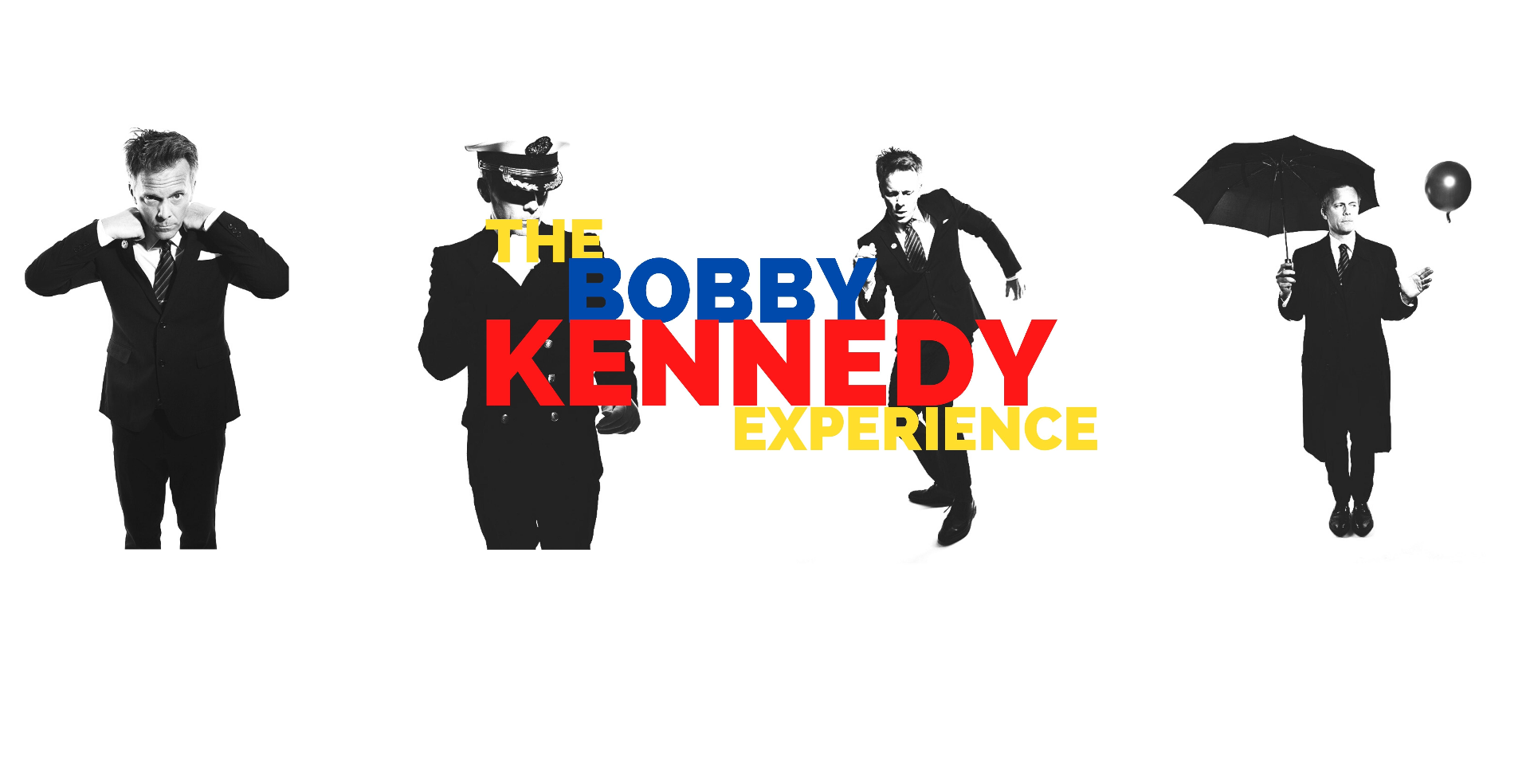 “…the biggest, boldest, and most successful choice – to revel unashamedly in the chaos and frantic pace of RFK’s final days.”

The chroniclers of other people’s lives set out on their journeys to answer one question – who was so and so? Who was Robert F Kennedy, for example? There are several plausible answers. Politician. Younger brother. Junior partner. Unlikely folk hero. Trailblazer. True believer. Martyr.

In ‘The Bobby Kennedy Experience’ Russell Lucas (directed by Sarah-Louise Young) brings together (some of) these threads which made up the life of the most famous man not to be elected US President. The threads of Robert Kennedy’s life were violently cut short by an assassin in June 1968, a low watermark in that decade of high profile murder.

We enter to find the disorderly detritus of a campaign stop. The floor is scattered with red, white, and blue balloons. Quotations about the man himself -from luminaries including Bono, Carlin, and Obama – are projected onto the back wall. It’s been nine years since Russell Lucas played RFK in the National Geographic documentary, ‘JFK: Seven Days That Made a President.’ The look is there. The stump speaker in shirtsleeves. The slight figure struggling to fill big shoes. The occasional glimpse of a perfectly tailored US Naval Reservist echoing the pomp and circumstance which immediately followed the President’s death in Dallas.

This is still a very raw production, or rather preview of the production possibly to come. The big and little choices are still stark and unrefined. The slips into freeform dancing, for instance, do not work. RFK was in the sixties but he was arguably not of the sixties as remembered by the people who, ip so facto, could not have been there. It detracts from the biggest, boldest, and most successful choice – to revel unashamedly in the chaos and frantic pace of RFK’s final days. To see the good the bad and the ugly from inside the subject’s head as a cacophony of noise and motion.

Sometimes the presentation meanders, other times it skips. It skips over RFK the hater of LBJ, over Robert Francis Kennedy the devout Roman Catholic, past Bobby Kennedy the one-time thorn in Jimmy Hoffa’s side. Lucas, as a paid-up Kennedy nerd, needs to slaughter a few more sacred cows and beef up the content to match his insight and commentary.

In these pages, when interviewing authors of biographies, I often ask “when” a hero or villain was to be found in their lifespan. When did the individual most resemble our lasting impression of them? No person lives entirely static. We experience life as a series of transitions from being one thing to being another. ‘The Bobby Kennedy Experience’ breaks the mould of one-person shows to be more Plutarchian than Suetonian. It is as much an inquiry into the internal mind as it is a portrait of the external man.

Get your coats on. Come for the honest homage to a great man. Stay for the drama. Come away with a sense of the possibilities.