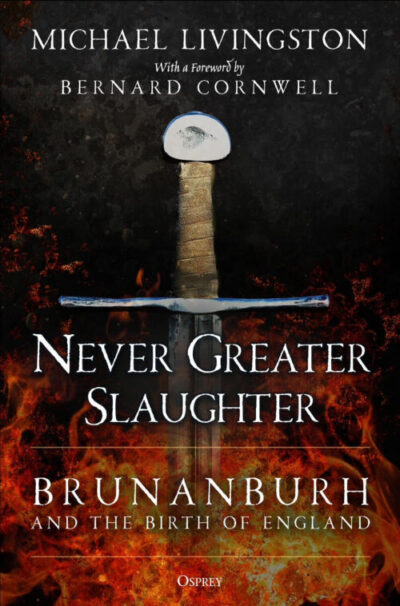 “Not only does Old English Brunanburh become Modern English Bromborough, the landscape, social, and political situations of the Wirral are a perfect match for everything we know about the battle.”

WHAT: Late in AD 937, four armies met in a place called Brunanburh. On one side stood the shield-wall of the expanding kingdom of the Anglo-Saxons. On the other side stood a remarkable alliance of rival kings – at least two from across the sea – who’d come together to destroy them once and for all. The stakes were no less than the survival of the dream that would become England. The armies were massive. The violence, when it began, was enough to shock a violent age. Brunanburh may not today have the fame of Hastings, Crécy or Agincourt, but those later battles, fought for England, would not exist were it not for the blood spilled this day. Generations later it was still called, quite simply, the ‘great battle’. But for centuries, its location has been lost.

Today, an extraordinary effort, uniting enthusiasts, historians, archaeologists, linguists, and other researchers – amateurs and professionals, experienced and inexperienced alike – may well have found the site of the long-lost battle of Brunanburh, over a thousand years after its bloodied fields witnessed history. This groundbreaking new book tells the story of this remarkable discovery and delves into why and how the battle happened. Most importantly, though, it is about the men who fought and died at Brunanburh, and how much this forgotten struggle can tell us about who we are and how we relate to our past.”

WHO: “Michael Livingston is a two-time winner of the Distinguished Book Prize from the International Society for Military History (2017, 2020), an author of best-selling fiction, an award-winning full professor at The Citadel, and a frequent public lecturer, and occasionally even a person on TV. At present, he serves as the Secretary-General for the United States Commission on Military History and sits on the Board of the South Carolina Academy of Authors.”

In 937, a massive alliance of Scots, Vikings, and Britons came together to try to eradicate England at a place called Brunanburh. From the first time I heard about the battle as a student, I found it fascinating. It sits at this enormously tantalizing crossroads of being an event of enormous importance in the history of the British Isles … yet it’s also an event about which very little is known. I’ve always liked puzzles, and as historical events go, this is a terrific one!

Other than the location, what are the things we don’t know about the battle and its context that you wish we did?

The absolute number one thing we’re missing, without question, is how the alliance came together. All three of the kings who banded together – Constantine of the Scots, Anlaf of the Dublin Vikings, and Owain of the Strathclyde Britons – had reason to hate each other, and yet they set these differences aside to try to take on King Athelstan of the English. The negotiations must have been fascinating, but we don’t know what they were. We don’t even know for sure whose idea it was at the start!

What’s your elevator pitch for Brunanburh’s having taken place on the Wirral?

Not only does Old English Brunanburh become Modern English Bromborough, the landscape, social, and political situations of the Wirral are a perfect match for everything we know about the battle.

How did Brunanburh live in the memory of ordinary folk in the immediate generations after the battle?

They called it simply the “Great Battle,” which speaks volumes about how horrific it must have been. As I say in the book, the violence shocked a violent age. How did they remember it over time? Well, poetry has long been a vital way of preserving the past, and Brunanburh was certainly no exception to this. The most famous “artifact” of the battle today is a powerful poem in the Anglo-Saxon Chronicle – the sole information that it records for the year 937. Likely there were many such things told in the years after the bloodshed, and we’re fortunate that this one survived.

If you could possess one item mentioned in your narrative, what would it be and why?

According to one chronicler, a Frankish duke sent King Athelstan a long list of treasures, including “the sword of Constantine the Great, inscribed with the ancient owner’s name in golden letters, with one of the iron spikes used to crucify our Lord affixed to the scabbard with golden fastenings.” I feel like that would be a nice addition to the office, right?

If it was possible for you to own a from life photograph portrait of any one of the characters chronicled in the story, who would you want to see and what would you be looking for?

What’s the best way to stand in a shield wall and live to tell the tale?

Bernard Cornwell wrote the preface to the book. What’s the best thing about his “Last Kingdom” series of novels and are there any parts you aren’t so keen on?

I love Cornwell’s novels – and not just the Last Kingdom ones! Wouldn’t change a thing about them, honestly. What I love best about them is the ways in which he manages to respect the hard work of historians while also pulling off that a bit. I mean, what are the odds that his Uhtred of Bebbanburg, being born in the 850s, would still be effectively swinging a sword at Brunanburh in 937? Not high, but damn if it doesn’t make for an awesome story!

You’ve got one year living as an observer in the 930s. What’s on your bucket list of sights to see?

Can I witness Brunanburh – and all the arrangements that made it happen – without participating in it? I’d do that if I could, just to satisfy my final curiosities. And what downtime I had I’d spend riding the roads from Hastings to Winchester to London and then up to York. Figure I’d knock out some other questions along the way!

In June I’ve got another historical investigation in the same vein of Never Greater Slaughter coming out: Crécy: Battle of Five Kings. I’m really excited for people to get their hands on it. Right now I’m working on its sequel, which is an investigation and reconstruction of the Battle of Agincourt.