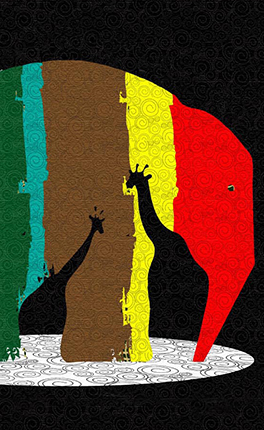 “Audiences have been slow to come back, but with vaccines and boosters, more people feel comfortable in crowds. But we have also had the time to dream and plan about future projects to share on both sides of the Atlantic.”

WHAT: “Three of Rudyard Kipling’s classic ‘Just So’ children’s stories are brought to life in a joint production between Central Standard Theatre in Kansas City and Blackout Theatre Company in Bedford. Starring both American and local British actors and with live percussion and sound effects, these stories will delight and entertain children of all ages (and their grown-ups!)”

Nope. I played John Clancy’s The Event at Bedfringe in 2013? However, I first started coming to Bedford in 2010, bringing several shows over the years… Driving Miss Daisy, The Zoo Story and Bill Clinton Hercules were all presented at The Place. Bedford has always shown itself a fantastic theatre town… patrons willing to take a chance on something as strange as a theatre company from America’s Heartland. The talented group of local artists that I’ve grown to know have become fast friends and the cultural exchange is never boring.

Actually, the pandemic restricted much of my work both with touring and home stage. After being shuttered for almost 2 years, we finally resumed KC production in September of 2021. It’s been a challenge to remember how to do what we do. Audiences have been slow to come back, but with vaccines and boosters, more people feel comfortable in crowds. But we have also had the time to dream and plan about future projects to share on both sides of the Atlantic.

This version of the Just So Stories has been around since 2005. My co-conspirator, John Story, adapted three of the fables for the inaugural Kansas City Fringe. John is a Sound Designer and engineer by trade and the production features percussion and sound effects to enhance the story. Each of the three stories features a Narrator, of course, as well as a menagerie of characters using Yank and Brit performers. Our sister company, Blackout Theatre Bedford, led by David Baxter, is partnering with us to present the show at Bedfringe. Joining me and John Story onstage will be local actors Natalie Částka, Elizabeth Thomas, Verity Moore, Matt Baker and percussionist Matt Hodge.

KIN – Blackout Theatre’s other fringe offering. Lissy Malt and Julie Blunt in the show. I can’t wait to watch my Brit friends play two American sisters from my part of the world. No Pressure.