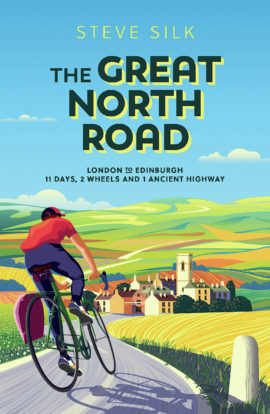 “I was attracted to the road we now call the A1 because it had been such a big part of my life. As a youngster growing up in Southern England but studying at Newcastle University I was up and down it all the time. Later I worked as a newspaper reporter in Darlington and then a TV reporter in Peterborough. So whatever I did with my life, the Great North Road seemed to be close by.”

WHAT: “The Great North Road is Britain’s Route 66 – we’ve just forgotten how to sing its praises

In 1921, Britain’s most illustrious highway, the Great North Road, ceased to exist – on paper at least. Stretching from London to Edinburgh, the old road was largely replaced by the A1 as the era of the motor car took hold.

A hundred years later, journalist and cyclist Steve Silk embraces the anniversary as the perfect excuse to set off on an adventure across 11 days and 400 miles. Travelling by bike at a stately 14 miles per hour, he heads north, searching out milestones and memories, coaching inns and coffee shops.

Seen from a saddle rather than a car seat, the towns and the countryside of England and Scotland reveal traces of Britain’s remarkable past and glimpses of its future. Instead of the familiar service stations and tourist hotspots, Steve tracks down the forgotten treasures of this ancient highway between the two capitals”

WHO: “Steve Silk is a journalist working for BBC Look East in Norwich. His two previous books – The Wherryman’s Way and Hidden Riverside Norwich – saw him take to a canoe to explore the Norfolk Broads. He’s now more comfortable on an old-fashioned touring bike with a pannier full of obsolete maps and flapjack.”

Why ‘The Great North Road’?

Well, before you even know what it is and where it goes, isn’t it a great name? Can any true traveller resist the thought of exploring such a highway? Slightly more prosaically, I was attracted to the road we now call the A1 because it had been such a big part of my life. As a youngster growing up in Southern England but studying at Newcastle University I was up and down it all the time. Later I worked as a newspaper reporter in Darlington and then a TV reporter in Peterborough. So whatever I did with my life, the Great North Road seemed to be close by.  Finally, as a cyclist seeking a new challenge, I felt the 400-mile length between London and Edinburgh offered just the right amount of jeopardy and adventure.

You are following in the tyre tracks of the Victorian cycling writer, Charles Harper. 100 years from now, what are the things about the landscape you cycled through that you expect will have changed the most?

That’s a tough one. I’m going to start off with what won’t change. We will always need places to eat and places to stay. So there will be cafes and inns – even if we call them something different. In fact, my friends with electric cars tell me they are currently spending more time in service station type places – because charging takes longer than filling up.

Moving on to changes, I guess the quality of road will improve. We’ve already seen huge upgrades in recent decades, yet north of Alnwick in Northumberland, the road does largely revert to a single carriageway in each direction. The obvious next step is dualling all the way to Edinburgh. With my history hat on, I have mixed feelings about this. Certainly, we need to make the most of those wild and woolly stretches while we can.

You write that of all the Coaching Inns still extant on the route, it’s the Bell in Barnby Moor that would be most familiar to Harper – even to the extent that he might have to take a moment to realise the time difference. What spot on the route would you like to change the least in the century to come?

I have a soft spot for Newcastle. I have a seriously soft spot for the moment you cross the Tyne gorge across the Tyne Bridge. That whole vista has improved immeasurably over the last 20 years. The Quayside looks the business, Gateshead has been transformed, they’ve got rid of the dodgy floating nightclub and the Millennium Bridge looks a million dollars. Now just leave it alone!

If you could go back in time and travel part of the route during the golden age of stagecoaches, which would it be and would you be sitting inside or outside?

I like the fact that the A1 gets noticeably wilder once you cross the border. So, I would summon up some bravery and be one of the “outsides” on that stretch where the road runs close to the North Sea between Lamberton and Burnmouth.

Here, you don’t need much of an imagination to summon up the ghosts of mail coaches past. It is still a truly exhilarating road made more dramatic by the proximity of the coastline. (Incidentally, this is one of many sections of the road where it would be suicidal – if not illegal – to travel by bike. I had to find quieter lanes further inland instead.)

What’s the one relic or artefact from the golden age of coaching (that you could fit on your writing desk) that you would want to acquire money and rarity presenting no problems?

Charles Dickens was a big fan of coach travel. And as well as being a great storyteller he is the master at description. I’d love to mysteriously acquire a notebook he’d used to scribble down his thoughts as he hurtled northwards. I feel I could certainly learn a few tricks from seeing the world through his sharp, all-seeing eyes.

What’s the best place to stand and see/sense the Great North Road as it would have been before the arrival of automobiles?

Stilton in Cambridgeshire. The Bell at Stilton is one of my favourite GNR pubs – it still looks like a coaching inn after all these years. But what sets Stilton apart is the breadth of its high street and the fact that it’s been so thoroughly bypassed that nothing had to change. Yes, you can hear the modern A1 in the background, but look more closely and I swear you can summon up at least the mirage of a four-in-hand, the horses snorting and the guard blowing his bugle.

You pack a lot of historic factoids into the narrative. What’s the best one that didn’t make the final edit?

There’s a museum directly under the A1(M) in Hertfordshire and it doesn’t even get a mention! Disgraceful I know, but I just had too much history at that point in my journey to weave in the archaeology around some Roman Baths. That is one of the challenges of a book like mine. To keep readers reading, you need a good mix of description, action and personality. The road provides my narrative thread, but I can’t always control the pace of the facts. There was just too much going on here. Many apologies to the museums department of Welwyn Hatfield council.

If you could share a convivial meal at an inn with any one of the great and the good personalities mentioned by you and Harper who would it be?

Well, first of all I would want Harper along too. I suspect we would argue quite a bit, but while several people have written about the Great North Road over the decades, we all accept that he’s the Boss.

As for the personality, I’d go for John Palmer. He was a Bristol man, rather than a GNR sort of chap, but he is single-handedly responsible for the introduction of the mail coach system. Before he came along the post was taken from place to place by slightly dozy blokes on horses. They were often beholden to – or in league with – the local highwaymen. Palmer travelled regularly from Bristol to Bath by stagecoach and grew fed up with their lack of get-up-and-go.

He was the one who came up with the idea of specialist mail coaches, protected by a guard armed with pistols and a blunderbuss. He also suggested that the turnpike barriers should be specially opened to increase their speed and reliability. Because the railways came along so soon afterwards, we forget how phenomenal a logistical achievement that was.

The Three Tuns at Beamish sounds like an epically brilliant concept. What are your top tips (sans bedbugs) that you would insist on for the sake of authenticity?

So, just to explain, Beamish Museum wants to build a replica coaching inn at its huge outdoor site in County Durham. Since Covid it’s actually gone a bit quiet but I’m sure they will get it sorted at some point. The original Three Tuns was at Scotch Corner – the place where Scotland-bound travellers had to decide whether to continue up the east coast to Edinburgh or cross the Pennines en route to Glasgow.

The museum wants to give people the chance to stay overnight at a “genuine” coaching inn. It’s a fantastic idea. I know there’s rightly a lot of emphasis on the food and the beer and the ambience. But I’d want horses – lots of them. They were what made coaching inns, coaching inns. I would want horses in stables, complete with an ostler shouting at stable hands and the “coachy” walking round like he owned the place. The sights and the sounds of a forgotten world.

I have another road in my sights. You might have imagined that having done the A1, I would have chosen one of other biggies – the A2,3,4,5 or 6 in England or 7,8 and 9 in Scotland.  In fact I’m going for the relatively unheralded A40. I’ve chosen it simply because I fancy the route. It goes over the Chilterns to Oxford and then includes the Cotswolds, the Wye Valley and the Brecon Beacons, finishing at Fishguard on the Welsh coast. It should be stunning.

I’m currently at the research stage. I am very much a part-time author, but I happen to have a week off at the moment, so Saturday saw me at Burford in Oxfordshire where there was an annual ceremony remembering three Levellers who were shot on Cromwell’s orders during the English Civil War. It’s rather complicated to explain here, but it’s just the kind of historical nugget that I enjoy digging out. On Sunday I did a 30-mile bike round around Oxford including Shotover Hill – once a haunt of highwaymen and more recently made famous by a Supergrass song. And on Monday I was exploring old chair factories around High Wycombe. When – or even if – this all morphs into an intelligible book is anyone’s guess.