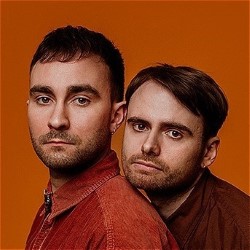 “In 2017 we realised the real money’s in the double act business – the rest is history.”

WHO: Will Rowland and Eddy Hare

WHAT: “The UK’s lowest energy double act explore the Wild West. Expect songs, characters, rootin’ and tootin’ from two best friends dressed as cowboys. Crizards are a couple of offbeat boys (Will Rowland and Eddy Hare). Both Will and Eddy are New Comedian of the Year finalists for their solo stand-up, and Eddy was nominated for the BBC New Comedy Awards in 2021. ‘Very wry, very well performed’ (Bruce Dessau). Leicester Square Theatre Sketch Off finalists. As seen on BBC One and BBC Three.”

This is our debut hour! We’ve been up for work-in-progress runs and stand up split bills before, and we did a couple of student plays when we first met. In 2017 we realised the real money’s in the double act business – the rest is history. The great thing about Edinburgh is getting to see all your friends’ shows and also making new friends. People often say Edinburgh’s all about “destroying your enemies” but we just don’t see it like that!

We started 2020 with a simple idea: what if a double act show were about cowboys? And what if the cowboys sang songs? Then we heard about Covid and learned that the world didn’t need that show at the time. We stopped thinking about the show during lockdown. Will briefly considered quitting comedy, Eddy bought a pull up bar but had to return it because it didn’t fit his door frame. A lot’s changed since then and 2022 feels like just the right time for a cowboy themed comedy musical – if it turns out we’re wrong we’ll be the first to admit that.

We’re Crizards, we’re the UK’s lowest energy double act, and this is a cowboy themed show with songs in it. It’s our first time doing a show with songs in it so it’s been really fun and exciting for us to write, and we think it will be really fun to watch too! Georgia House is producing it, and we’ve been doing work in progress shows all year but Edinburgh is its first proper outing – afterwards we’ll take it wherever we’re asked to (within reason).