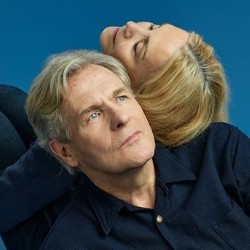 “There are surprises on the Fringe everywhere you look, an intensive, packed experience which reminds even the most diehard box-set viewer of the pleasures of live performance.”

WHAT: “Robert Bathurst (Cold Feet, Downton Abbey, Toast of London) stars alongside Rebecca Johnson (The Trip, The Flood) in this heart-breaking and hilarious double-bill of love and loss, written by Costa Book of The Year Award-winner Christopher Reid and directed by Jason Morell. Intertwined with glorious animations from cartoonist Charles Peattie, Reid’s A Scattering and The Song of Lunch are brought to life in this critically acclaimed production.”

This is my sixth Edinburgh as an actor and the second time bringing my own show. It’s a great place to try out something unusual – audiences are up for it. There are surprises on the Fringe everywhere you look, an intensive, packed experience which reminds even the most diehard box-set viewer of the pleasures of live performance.

Don’t always believe what you hear. Question everything.

I’ve taken two books by the poet Christopher Reid and adapted them for theatre using 90 minutes of brilliant cartoon animation. Rebecca Johnson and I perform. I’ve been developing the show for ten years – animation takes time – and have loved collecting a great team, including co-producers Assembly Productions and Something For The Weekend; everyone has patiently stuck with me.

We tried out one half – the funny half – of Love Loss & Chianti in Edinburgh in 2018 and launched the whole show in London in March 2020. We lost everything, like so many others, and have regrouped to do it here. It’s so exciting to be doing this material again.

For slam-dunk guaranteed entertainment and breathtaking skill it has to be the Showstoppers improv gang. I’m also looking forward to Baxter vs The Bookies – I love horseracing; Tim Vine, I surrender to him completely Frank Skinner, I’m devoted to his poetry podcast and loved his book on standup; Basil Brush’s Family Fun Show, probably the hit of the festival; Debussy At Teatime, what could be better?; Arthur Smith, he’s a listed monument, the funniest one I’ve seen; Ghosts Of The Near Future, looks like a wild ride; and Tim Key, with whom I spent a night in Kuala Lumpur.