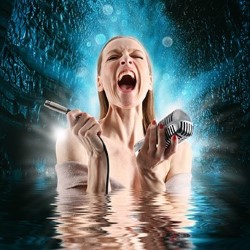 WHAT: “The Silent Treatment. A singer loses her voice and embarks on an unexpected journey of self-revelation. Based on a true story, this intimate, funny and uplifting new solo show combines storytelling, physical theatre and song to explore how the body remembers what the mind forgets. From award-winning performer Sarah-Louise Young, creator of An Evening Without Kate Bush and Julie Madly Deeply.”

I love how rich and diverse the array of talent is at the Fringe and take part as much to see other shows as to perform myself. It’s also the one month of the year when I get to see my performer friends as we are often on the road at the same time.

With over 3000 shows to choose from it can feel a bit overwhelming for an audience, but strong word-of-mouth can turn a small underground show into a festival hit and that’s exciting. I’m always on the look out for new and later emerging artists and like to see as much local work as I can as well. We own a debt of gratitude to the people who actually live and work in Edinburgh and this festival should be as open to them as possible.

It’s always a risk bringing new shows up here of course and it’s an expensive and ambitious undertaking, but with the PBH and Laughing Horse Free Fringes there are ways to do it a little more economically.

The first week is always hectic with everyone flying by the seat of their pants as they bed in their shows and navigate flyering, accommodation, getting changed in a broom cupboard and remembering to eat. With new audiences arriving every day there is always something you could be doing to sell your show, but that’s a positive. Yesterday’s one start review could be tomorrow’s award-winning success. It’s a brilliantly bonkers, beautiful, Behemoth!

I took ‘An Evening Without Kate Bush’ to the Fringe in 2019 (also playing this August alongside ‘The Silent Treatment’) and was about to start a national tour when lockdown happened. I’m not a frontline worker so I know by contrast my struggle was not comparable. But it was a challenge, losing a year’s work over night. Doing gigs in my living room on Zoom and making money where I could gave me a renewed appreciation for a live audience. I’m very grateful I was able to create online content but when I was invited to share ‘The Silent Treatment’ online I decided not to. The show is about voice loss and explores what it feels like to stand in front of an audience knowing you might not be able to make a sound. The inspiration for the show came in Edinburgh when I lost my voice for 24 hours and I knew I wanted to return to the scene of the crime. The audacity of doing the show here spurred me on to continue making it.

‘The Silent Treatment’ is my first truly autobiographical story about my historic struggles with sporadic voice loss. There is a lot of shame around singers and their voices, with performers afraid to open up about their experience for fear they will be thought of as a liability. As it happened there was a medical reason for mine and I was able to seek help. But along the journey I discovered so much more about who I was and how my body had been protecting me for years.

This really is the show I shouldn’t be making because I was advised very strongly by industry professionals that speaking out about my experience would reflect negatively on me – well that was a red rag to a bull! I hope by sharing my story I can help others tell theirs and feel less shame.

After 6 years of thinking about it, I begun work in late 2019 and shared a very tentative 20 minute version to a handful of trusted friends who all belong to the Authentic Artist Collective (https://www.authenticartist.co.uk). The brilliant Sioned Jones, who is a terrific actor in her own right, was there and she gave me some really helpful feedback. I knew at once she was the right person to direct my show and was delighted when she said yes.

Although the subject matter is serious I wanted the piece to have humour and levity too and we share a similar sense of the absurd which sealed the deal. Sioned has helped keep me on track and brought her gifts of imagination and movement to the rehearsal room. It may be my story but I feel ‘The Silent Treatment’ is as much hers as it is mine.

When we had to pause making it over lockdown we kept talking and worked on an audio version which then developed into this final version you’ll see at Summerhall this year.

The final piece of the jigsaw was brining the fantastic Christopher Ash in to create the sound design and co-write the songs with me. I met Chris through Showstopper! (The Oliver Award-winning musical improvisation group I was a member of for over 10 years) and we had also worked together on a production of ‘The Show Queen’ at Park Theatre London and a new musical ‘The H Word’. He has such a delicate and sensitive approach to music and was the perfect person to realise all the different sound worlds in the show. A lot of the story takes place inside the human body so one moment you’re watching a vaudeville song performed by two cysts and the next you’re inside the human heart.

In the two years it’s taken us to bring ‘The Silent Treatment’ to the Fringe it has evolved, I hope for the better. It isn’t the show it would have been had we shared it in 2020. We’ve done four previews and so far the repose has been terrific. Whenever you make work, especially autobiographical, you have to interrogate why people should care, what’s in it for them? I really wanted to make something which resonated with anyone who has been silenced or shut down, not just me as a singer. I hope I have done that with ‘The Silent Treatment’.

There are SO many incredible shows to see!

Top of my list is ‘Kathy And Stella Solve A Murder’ at Summerhall. It’s written by Jon Brittain (Rotterdam) and Matthew Floyd Jones (of Frisky & Mannish) and the cast is to die for. I’m a big fan of Jodie Jacobs.

I’m also making a beeline for ‘Blue And Pip’ from the award-winning writer of ‘Rust’, Helena Fox. They are an exciting artist and it’s described as ‘a modern-day folktale exploring endometriosis, the patriarchal healthcare system and the ebbing of the tides’.

Rather cheekily I have to say ‘Looking For Me Friend: The Music Of Victoria Wood’ which I have directed! It’s a beautiful show starring Paulus and will leave you with a warm hug in your heart.

Check out ‘Ada Camp: Too Little, Too Soon’ for comedy and variety, ‘She/ Her’ for theatre and oh so many shows! I should probably stop now… unless you’re into Kate Bush in which case…