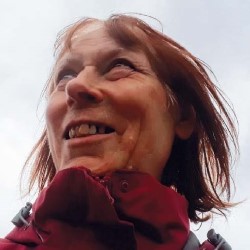 “Themes for my current Fringe show include womanhood, war, class, punk, love – oh and seagulls. Something for everyone !!”

WHAT: “Full of laughter and tears, this is poetry as entertainment. Punctuated with true-life stories and song. Packed with humanity, compassion and pithy observations on life. From womanhood to war, from class and punk to love, and the beautiful game. Moving, funny, gaspingly honest. Expertly written and performed. ‘Absolutely joyous, funny and emotional.’ ‘Told so simply, with great depth.”

I live in Edinburgh and have been lucky enough to be part of the Fringe many times in a range of roles – actor, director, street theatre performer, producer. This year – poetry, spoken word, song. The great thing about the Fringe is the variety, the opportunities and the internationalism -for performers and audience. And sometimes they merge. One year I invited anyone who wanted to, to come along and we would create a piece of theatre that would show that evening. 17 brave souls turned up – from Canada, Thailand, Scotland, England and elsehwere . Professionals and amateurs performed a show that night that they had created together and they played to a full house!! Wonderful! I have also been a punter and again it is the variety and internationalism that I enjoy. Also the sheer excitement you can feel in the street, in the auditorium, backstage. People having fun!

I have learned you can act in 19th century French farce from your own living room alongside 2 actors in their living rooms, directed by 2 directors based in Milan and Sardinia and play to an audience looking at you through this thing called Zoom and you can make it work !!! Thanks to EnglishMilanTheatre for believing it could!!! Magical watching a piece of bread being handed from one actor in Glasgow to one in Edinburgh and it seeming to be the same piece of bread! And then there was the acting ( of course!) . But it was great working on timing etc miles away from each other. I learned having COVID is no fun but also that slowing down and just taking one day at a time leaves space for – well, creativity, I guess. I wrote this show during lockdown – and learned I can write poetry (and songs) and create a whole show from that. Give it time and things will evolve . Simplicity. Good for the soul.

My show is ( I hope!) an entertainment of poetry , spoken word and song. I started writing poetry during lockdown and it just growed!!! I love the way words can tell stories and poetry can create a language that we can all relate to – build pictures and feelings and intertwine them all so that we suddenly discover we are looking at life and this show is about us ( except when it’s about THEM and we get a chance to say what we think about THEM!)

The company is me ( though I am helped this year by a wonderful creative producer, Ida Casilli, who also has several other hats !! ) I started writing my own shows around 8 years ago because I wanted to perform again after many years of directing and heading up projects and the simplest way of getting the gig seemed to be if I wrote my own show !! I also really loved singing so incorporated that ( there are a coupla songs in this current show for that reason). I did a 30 minute online version of this show as a Platform event with Edinburgjh Performing Arts Development who help with that kind of thing and are amazing. I then developed it into a full hour and it premiered at the Scottish Storytelling Centre to a sell -out house which was when i decide to bring it to the Fringe ( same venue). I am planning to tour it afterwords – round Scotland, Italy expressing interest and other possibilities in the offing. My other shows are still touring – with Gie’s Peace on at Prague Fringe in late September and Bonnie Fechters and After Judy Chicago also available. The former is about women of courage throughout history and After Judy Chicago includes a the audience sitting at their own Dinner Party as that was the title of Judy Chicago’s iconic feminist artwork that the piece is based on. Themes for my current Fringe show include womanhood, war, class, punk, love – oh and seagulls. Something for everyone !!

There are so many to choose from! See Alan Cumming in his Burns show. He really works his craft, that man.
Look out for local artists – support them – they are here all the year round working away when it is not all so festival-ly. Scottish Storytelling Centre might be a good start for some of that though it is full of artists from throughout the world too – lots of theatre as well as traditional storytelling.
The Medea – cos my pal Pauline Lockhart is in it. Plus I hear it’s quite a good play!! Been a round a while.
Experiment, have fun, and come back next year !!!