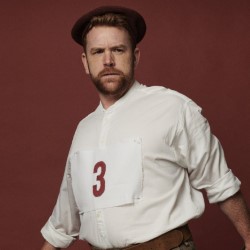 “I’m from New Zealand which is traditionally located on the other side of the world, so getting to Edinburgh has been difficult in the past.”

WHAT: “32 athletes entered the 1904 Olympic marathon in St Louis, Missouri. Only 14 finished… What happened in between was a perfect storm of stupidity, cheating, raw eggs, wild dogs and rat poison. In his Edinburgh debut, New Zealand comedian Nic Sampson brings to life the incredible true story of one of the dumbest sporting events of all time. Co-writer of Starstruck (BBC Three). Star of The Brokenwood Mysteries (UKTV).”

WHERE: Pleasance Courtyard – The Cellar (Venue 22)

This is my first time doing the Edinburgh Fringe! I’m from New Zealand which is traditionally located on the other side of the world, so getting to Edinburgh has been difficult in the past. I moved to the UK in 2019, just in time for things to get really good over here! I’m excited at the prospect of seeing lots of shows, meeting lots of comedians, and losing my mind over the course of the month!

I’ve learned that when you decide to move countries, check to see if any big pandemics are on the horizon. Also, during the lockdown me and my wife read about what Antarctic researchers do to pass long stretches in isolation. Apparently the thing to do is find something slow growing like a plant, and monitor its progress every day. We picked a strawberry plant in our local park, and every day we would check in on it, waiting for that fateful day when it would finally bear fruit. In the end it turned out the plant we were monitoring was just a weed. But I still think the idea was solid.

My show is called Marathon, 1904, and you’ll never believe this, it tells the story of a Marathon that took place in 1904. Specifically, the 1904 Olympic Marathon in St. Louis, Missouri.

It was probably the wildest, most disastrous Marathon in the history of the Olympics, but the story has been somewhat lost to the sands of time. It’s an utterly mad tale of stupidity, corruption, wild dogs, raw eggs and rat poison. And it all really happened.

I came across this story randomly a few year ago and was surprised that I’d never heard it before. How could a story this crazy not be more widely known? Why aren’t we teaching this in schools, if for no reason other than to discourage people in their 30s from attempting marathons?? So I decided to share it the only way I know how, by making myself the centre of attention. I know little about sports and I’m a decidedly average runner, but I am a skilled actor who can do up to four different voices.

They should go and see SNORT – the improvised comedy show that I’m doing with my pals from New Zealand every night at Pleasance at 11pm. It stars Rose Matafeo, Two Hearts, Eli Matthewson, James Roque, Alice Snedden and more, and I hope this isn’t TMI but it’s a lot of fun!