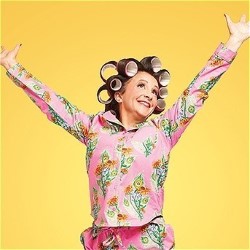 “I think Edinburgh is a magical city anyway, and in August it’s even more special. I’ve seen hundreds of hours of live shows, lived in dozens of different flats, and eaten about a million baked potatoes from the Tempting Tattie on Jeffrey Street.”

WHAT: “A brand new stand-up show from the Fringe favourite. As heard on Radio 4’s The News Quiz and The Now Show. TV appearances include Would I Lie to You, QI and Live at the Apollo. Wake-Up Call is a show about revelations, realisations and epiphanies – both large and small. Subjects covered include: bin collection schedules, the novels of Jean Rhys, cats, school-fair booze tombolas, the Scottish Enlightenment, pressure washers and Huel. It’s an exuberant, silly show with some wisdom sprinkled on top.”

I first came to Edinburgh to be a member of the Perrier Comedy Awards Panel in 1992, so this is my 30th anniversary of coming to the fringe! I didn’t realise it was such a momentous year for me until right now. My love affair with this festival is one of the longest relationships in my life. After losing my fringe virginity in 1992, I came back in later years as an assistant producer of the Perrier Awards, a TV scout, and finally as a comedian. I think Edinburgh is a magical city anyway, and in August it’s even more special. I’ve seen hundreds of hours of live shows, lived in dozens of different flats, and eaten about a million baked potatoes from the Tempting Tattie on Jeffrey Street. The best festivals are ones where the weather is not too rainy and not too hot – fringe venues are notoriously humid – and where there are lots of acts who are doing exciting, challenging work. I think that after a few years of being confined to quarters, performers this year will be more inclined to take risks and try new things, so I’m really looking forward to it.

On the subject of lessons, I have learned that I could never be a teacher – having to home school my children was a very traumatic experience for me, my husband and the children. Mostly for the children I think. We coped in the end by just realising that my husband and I know nothing, and teaching the children some fun facts that their teachers will have to correct now that they’re back at school. We told them that Queen Victoria was Winston Churchill’s drag name, that Julius Caesar was famous for inventing salad dressing, and that mixing your parents a gin and tonic is a very important scientific experiment that must be done at least three times a day.

Wake-Up Call is my favourite fringe show so far, because it’s incredibly personal and great fun. It’s based on all my experiences from the last few years, which are still quite raw, and hopefully audiences will relate to it. Although we all had vastly different experiences of early covid, lockdowns, and the weird period since, I think we’ve been united by common experiences in a way that I’ve never known in my 49 years on earth. The show is brand new for the festival, but I’ll be taking it on tour around the UK in 2023. It’s written by me, with some additional material by the brilliant writers Gabby Hutchinson Crouch and Mike Shephard. It’s being produced by the mighty Bound and Gagged, who are veterans at helping disorganised comedians like me get our shit together. It’s being publicised by the amazing Gaby Jerrard PR, who make sure that I do interviews like this one, and try to persuade reviewers to come and see the show. I’m incredibly grateful to all of them for their help.

I’m most excited about seeing Jordan Gray’s show “Is It a Bird?” At The Assembly George Square. I saw a little taster of her show last month and it was exceptional. She’s an all-round entertainer: she can sing, she can dance and she’s hilarious. To be honest, it’s a little bit unfair of her to be so brilliant.