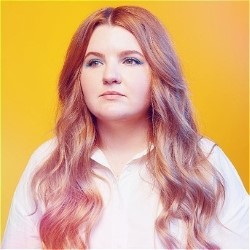 “I’ve also realised I often spout off facts that I’ve heard via word of mouth, that probably aren’t actually true.”

WHAT: “This show is a scrapbook of memories about my family. Two of them have smelt a Bigfoot. One has seen it. They all agree on a military cover-up. I couldn’t get home for two years and had this anxiety that someone in my family would die and I wouldn’t have enough to remember them by. It’s relatable comedy to country people and absurd comedy to city people. 2022 Melbourne International Comedy Festival Most Outstanding Show nominee and Pinder Prize winner.”

It’s my first time doing a show at the fringe, I’ve been twice before, once accidentally, It was before I did comedy and my dad and I came to Scotland together to do a Haggis tour (traditionally for young backpackers who want to fuck I think?) But dad and I had a lovely father/daughter trip, the few days we had in Edinburgh it was very busy and we didn’t think to work out why. Now I know what the festival is, I’m looking forward to it.

I’ve learnt that most of the life lessons I think I’m learning are just things I’m telling myself to affirm my viewpoint. I’ve also realised I often spout off facts that I’ve heard via word of mouth, that probably aren’t actually true. I often find myself saying stuff like “Did you know that ants have graveyards and when they smell another ant is dead they carry it off to the ant graveyard…but sometimes they get the stench of death on themselves so they walk themselves off to the ant graveyard, so they don’t cause more work for the other ants…then after a while of not dying they go “well I guess I’m not dying and walk back to the colony” but also I don’t actually know if that’s true, my friend just told me”

My show is about trying to collect memories of the people I love before they’re gone. I wrote it, but my boyfriend did listen to me talk about it every day for ages and to different ideas and encouraged some and discouraged others so he helped big time. Country Mile productions is producing it, they’ve been so incredibly great. I’ve done the show at different places around Australia, and after the fringe I think I’d like to make a portable version (because the show has quite a big set) I could maybe take to country towns around Aus. since it’s a very country people focused show.

They should go see someone they haven’t heard of because it’s nice to see new things. They should ask around and see what people are enjoying once the fringe has started and word of mouth starts. They should also go see Dan Rath because he has a really unique voice, works super hard and has a really high joke per minute ratio. (I’ll give a few more recommendations after my show, probably based off what I’ve seen and recommend and who I feel sorry for and want to try in some way to support them).