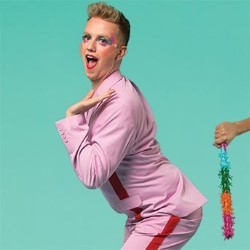 “I’ve already printed a spelling mistake on all of my posters. There goes the best poster award!”

WHAT: “People keep telling James he’s “too gay”. Straight Jokes is his fabulous reply. An out-of-control hour of jokes from the utterly hilarious, nearly national treasure. James roasts his ex-employers and navigates the exhausting admin of finally accepting who you are. A battle cry to be yourself. The gay half of hit comedy podcast A Gay and A NonGay, which has had over 5 million listens, and co-host of The Hits Radio Breakfast Show. The award-winning ginger returns to Edinburgh after his five-star 2019 debut, Thirst Trap”

This is my second Edinburgh Fringe and I’m absolutely buzzing. The intersectionality of performers, stories and audiences make Edinburgh Fringe the most prestigious festival in the world. I used to come to the fringe as a tourist every year, desperate to perform! I’m so proud to be coming back.

Probably not. I’ve already printed a spelling mistake on all of my posters. There goes the best poster award! I am getting up super early for my breakfast show on Hits Radio every day throughout the fringe, so I think I’ll definitely be prioritizing naps and avoiding wine!

I’ve been performing at loads of open mic and new material nights in both London and New York to write my new hour- it’s the result of over 10 months of writing and I am enormously excited to premiere it in Edinburgh. My director is comedy performer, producer and writer Chris Gau (The Free Association, Borderline, Screen Grab).

I’m really excited to see Grace Campbell’s new show- her tiktok makes me die! Jen Ives: Peak Trans is definitely one to watch! There’s so much nonsense about our trans family in both the press and problematic comedians’ Netflix specials- it will be completely refreshing to see a trans comedian tell their own jokes.