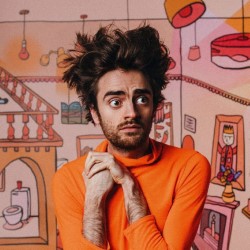 “I’ve been building this show with audiences since May 2021, including a stop at the reduced Edinburgh Fringe last year. My last pre-Fringe stop was at Buxton Fringe, where I was nominated for Best Comedy Show and won the award for Originality.”

WHAT: “Welcome to the great indoors. This ‘gut-bustingly funny’ **** (List) bird-brained boy has been hoarding his best show yet and he’s finally ready to give it away to a good home. Like visiting IKEA on acid, this is a psychedelic domestic breakdown that will make you totally rethink your mundane little life. Star of the upcoming Disney+ series Extraordinary. As seen on Channel 4’s viral series The B@IT.”

My very first trip to Edinburgh was nine years ago, terrifyingly, although I’ve only been doing comedy shows here since 2017. I wasted a good few years doing terrible devised theatre pieces, which is the best training in the world. Nothing will make you appreciate doing a comedy show than doing a fair few runs of Sarah Kane’s 4.48 Psychosis. So don’t be angry at all those student productions slaughtering the classics with physical theatre. They’re comedians in training.

Weirdly, because of the long hiatus between now and the last “proper” Fringe, this feels like doing a solo show in Edinburgh for the first time again. I really don’t feel like I know how it works, or what the rules are, or what it’s going to be like for me. The unpredictable is both the best and the worst thing about the Fringe.

In 2019 I was doing a terrifyingly high-concept hour about the internet and its effect on our brain chemistry – but as a mime show. It was insanely ambitious, with the most complicated tech I’ve ever worked with run off a 2006 Powerpoint Slideshow. It was a solo show with a cast of three other performers, and I got delivered in an Amazon box at the start of every show. Sometimes we were waiting ages for an audience member to come and open that front door. I had a loop pedal going of the audience’s own laughter, and a live feed to a webcam. The show was kind of devouring itself, live onstage.

I was trying to make a comment about how precious live performance is and how technology can distract us from living in the present. But I think you make a better argument by just, you know, making a more enjoyable live experience. This show is a bright-orange dayglo denial of all the darkness outside the door – it’s a celebratory ode to the great indoors, and is filled with all the stupid stuff I did with the objects I was trapped with for the last few years. Deciding early on that I wasn’t going to create the kind of limitations I gave myself in 2019 really helped me slowly shape this show as opportunities for live performance waxed and waned post-pandemic.

The show is called Luke Rollason: Bowerbird, and it’s like a psychedelic tour of an IKEA. It’s Toy Story for people who own too much furniture, featuring an armchair singing the lost loves that left behind their bum imprints, abandoned utensils with uncertain parenthood, and the sordid spooning going on in your cutlery drawer.

I’ve been building this show with audiences since May 2021, including a stop at the reduced Edinburgh Fringe last year. My last pre-Fringe stop was at Buxton Fringe, where I was nominated for Best Comedy Show and won the award for Originality.

I’ve got the most lovely and supportive team in Objectively Funny (a production company run by comedians) who have nursed this show through real ups and downs, including breaking my hand which was a NIGHTMARE for a mime artist. I am now bimanual once again.

After my show, my audience should go watch The Lovely Boys. Joe Kent-Walters and Mikey Bligh-Smith are two Northern lads doing some of the most bizarre and creative comedy on the scene. Joe recently won the Chortle Student Comedy Award, and Mikey has a secret little cameo in my show. Performing with him in previews has been such a joy – he’s a fantastic talent.