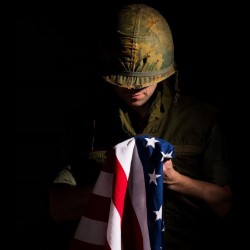 “I like to think that the experiences of the last two years has made people a little more willing to celebrate each other’s work and treat other companies and performers as colleagues rather than competitors.”

WHAT: “When Jimmy Vanderberg leaves the Ford factory in Detroit and volunteers to serve in Vietnam, he wants to prove himself a man. But after the war, Jimmy returns to a country more humiliated than grateful and feels abandoned by those he served. Years later, Jimmy decides to “Make America Great Again” but a chance visit by the son of a fallen comrade forces him to doubt his convictions. A gripping solo play by award-winning actor/playwright Richard Vergette. ‘An excellent storyteller… master of surprise revelations. A complex and demanding play that is a pleasure to watch’ (BritishTheatre.com).”

I am something of a seasoned fringe veteran! However, this is my first fringe as a performer/writer for more than 20 years. I first came to the fringe in 1984, hiring a slot from the old Wilkie House in Cowgate – that later became The Gilded Balloon. I did a one man show called The Pedagogue by James Saunders. It was reviewed by the great Haydn Murphy, an Edinburgh based Irish poet who was reviewing for The Scotsman that year. We met up in Bannerman’s bar afterwards and drank a few pints and smoked a pack of Embassy Regals! I’ve wanted to come back for some time but not until I’d found the right project.

Since 2019 I’ve been through a lot personally and professionally. I retired as a teacher so I could devote more time to writing – but not necessarily performing. My Mum died last year and my wife is recovering from a serious illness. The lesson for me was ‘If you feel passionate about something, don’t hang around for anyone to give you permission – seize the day!’ I like to think that the experiences of the last two years has made people a little more willing to celebrate each other’s work and treat other companies and performers as colleagues rather than competitors. Edinburgh can feel bloody lonely if you’re in a one person show that’s not doing well but I’ve had some great exchanges on Twitter with writers and performers at the same venue. We’ve all promised to support each other’s work. For me the big lesson from the pandemic is to find the joy in each other’s work and try to help each other out.

I wrote the show. It’s a one man show so the great thing is I don’t have to wait for the cast to turn up to rehearsals. I watched the 10 part series (written and produced by Ken Burns) The Vietnam War. It was probably the most devastating and brilliant documentary series I’ve watched. I came to the end of it and said out loud ‘There’s a play here’. So I watched it all over again with a notebook in front of me. When I retired from teaching my class have me a notebook with a printed front page which read “Don’t stop writing”. The notes I took, literally filled the book. But I didn’t just want to write a play about the past. It seemed to me that there was a real link between the bitterness, anger and pain experienced by many of the US veterans and the sense of dislocation and abandonment that Trump tapped into during his 2016 election campaign. My character, Jimmy, is a car worker from Michigan. He developed over time but there were a number of specifics that led to me choosing a car worker from Michigan. Before he became Defense Secretary in 1964, Robert MacNamara had been President of the Ford Motor Company. Also Michigan was a Rust Belt state that had been Democrat for many years but voted for Trump in 2016.

Being a one man show, there is a great opportunity to develop a relationship with the audience. Jimmy sometimes jokes with them but also uses them as a confessional. He’s a man troubled by his past and anxious to be absolved from it. Whilst he’s a man who often says and does the wrong thing, he’s worthy of our respect. I’m so excited to be playing him and telling his story.

I’m very fortunate in having a great friend, Andy Jordan, who’s a producer. In 2019 I ‘pitched’ this idea to him and amazingly, he went for it! Andy Jordan Productions is a a great company to work with and I’m eternally grateful to all of the team. Without them I suspect I’d be performing in a garden shed somewhere in Morningside! I also have another great friend, Andy Pearson, the director, who I’ve known since – well actually since we did an Edinburgh show together!: The Little Rats in George Square Theatre for The National Youth Music Theatre. We’ve been friends ever since and worked together frequently.

Andy Jordan is directing Hiya Dolly! in the Grand Theatre (venue 53) every day at 20.00. Its the extraordinary but true story of Dolly the Sheep – the world’s first cloned mammal who was created and born at the Roslin Institute just outside Edinburgh. Andy tells me that as well as telling you all about Dolly, unusually it its tells you a bit about the science of cloning. It also has several live Scottish folk tunes which give a fresh twist and plenty of woolly humour.