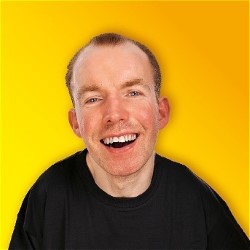 “You get the chance to see something incredible, something shockingly bad and something you would never usually go to watch, all in the space of a few hours. I draw the line at those annoying Silent Discos that roam the streets of Edinburgh though…..”

WHAT: “Following a sell-out UK tour, Lost Voice Guy returns to Edinburgh with his brand-new show. The Britain’s Got Talent winner and star of Ability (BBC Radio 4) and Christmas Comedy Club with Lost Voice Guy (ITV), pokes fun at his life living as a disabled person in a post-apocalyptic world with his new Geordie accent. From the highs of meeting 50% of The Chuckle Brothers to the lows of being called ‘him off The X Factor’. ***** (Metro).”

WHERE: Gilded Balloon at the Museum – Auditorium (Venue 64)

My first full run at the Edinburgh Fringe Festival was back in 2013, and I remember it well. Let’s face it, it’s hard to forget when you burn yourself out so much that you end up in hospital with pneumonia. And that’s exactly what happened to me. Not that it put me off though. In fact, it just gave me material for my next show in 2014. Thankfully, I’ve never been back to the Edinburgh Royal Infirmary since, because I learned a very hard lesson on the importance of pacing yourself. So, you could say I’ve developed as much as the Fringe has over the years. One of the main changes I’ve noticed over the years is the variety of entertainment that the Fringe has to offer. There certainly seems to be something for every taste these days. I mean some of it is absolute rubbish, but that is what makes the Fringe great. You get the chance to see something incredible, something shockingly bad and something you would never usually go to watch, all in the space of a few hours. I draw the line at those annoying Silent Discos that roam the streets of Edinburgh though…..

I’m not sure if I’ve changed the way that I work. I’m very stuck in my ways. It’s been a really hard time for most people, obviously. My creativity has really suffered during lockdown, to be honest. It’s pretty hard to get inspired when you’re stuck inside all day. I’ve still had the opportunity to write my Radio 4 sitcom, called Ability, and I really enjoyed doing that. It gave me my creative spark back, and I loved having fun with it again. Hopefully that’ll spur me on to be more creative this year. I just feel lucky that I had a really busy year in 2019, which has helped massively in the last year. I don’t know what I would have done otherwise. At least, it’s given me a good opportunity to write my Edinburgh show.

My show is called ‘Cerebral LOLsy’. And yes, I did take the rest of the week off work after thinking of that title. The show is t’s basically a look back at my life since i won BGT and all the random stuff that’s happened since. And that includes dancing with Paul from The Chuckle Brothers at the Royal Variety Performance after show (which was definitely a career highlight!)

There’s plenty of other stories. People always seem to get my name wrong as well. The main reason that I chose a stage name was so I would stand out from the crowd of all the other new comedians, when I was just starting out. I thought it would make me more memorable. But you’d be surprised at the many variations of that name that i have called. People have called me all sorts. From no voice boy, to misplaced voice man, to the guy with no voice.

And then, of course, there’s been the trolls on the internet. For example, one tweet that I received said, “well done on finding the easiest way to do comedy. You can just write stuff on your laptop, and get that to remember it and say it for you.” Of course, he is right. Can you imagine how hard my life would be, if I could actually talk? It just doesn’t bear thinking about. I’d have to remember how to say words, remember how to form sentences, remember all my jokes. Clearly by choosing to be disabled, I have taken the easy way out. And, for that, I’m truly sorry!

I started doing comedy at the same time as Lauren Pattison, who is another Geordie comedian who has done really well for herself. So we’ve always really supported each other, which is nice. I’m very proud of what she has achieved since we both started, and it’s great to see her being so successful. I’d recommend checking her out at the Monkey Barrel.