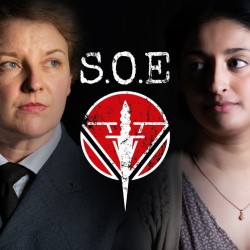 “A few months into the project we cast Natasha Jayahendry as Noor Inayat Khan. Natasha is a formidable Noor and she has equally transformed the piece.”

WHAT: “The WW2 Special Operations Executive is tasked with espionage, sabotage and reconnaissance. As a wireless operator, life expectancy is six weeks. Madeleine is the codename for one such agent. Flown by moonlight to occupied France, her job is to keep her circuit connected with London. Gestapo Officer Josef Kieffer is on her trail and the net is closing. Now the war is over, Vera Atkins is trying to uncover the truth. Of all the 12 cases of missing women agents, one haunts her the most – Madeleine – the Indian princess, Noor Inayat Khan.”

This is CLAIR OBSCUR’s second visit to the Edfringe. Our first time was in 2018 when we brought ‘A Necessary Woman’, a play I co-wrote with Philippa Urquhart about the suffragette Emily Wilding Davison. That year was the centenary of the passing of the Representation of the People Act, when the first groups of women won the right to vote.

‘A Necessary Woman’ was the perfect piece to bring to the festival and I have vivid memories of marching along the Royal Mile with the WASPI women and making speeches as Emily to publicise the show.

My two daughters who came with me were quite young at the time, so this year, now they’ve grown, I am hoping to see a good variety of shows with them.

I know it’s a cheesy thing to say, but I suppose not to give up or lose hope. At the height of the pandemic, it was hard to see how things might ever recover.

The lockdown forced me to focus on my writing much more and to write for other mediums. I wrote my first radio play, ‘Best Beloved’, which has just been published by Methuen Drama in the same collection as ‘S.O.E.’ Then I found the story of Vera Atkins and Noor Inayat Khan. It began its journey as a short first scene between the characters. I then dared to share this with a couple of trusted friends, chiefly my co-producer, Nicholas Collett, who thought their story was truly inspiring and has believed in this project from Day One.

A few months into the project we cast Natasha Jayahendry as Noor Inayat Khan. Natasha is a formidable Noor and she has equally transformed the piece.

CLAIR/OBSCUR is a female-led theatre company that places women in key roles within the creative team – playwright, director, designer, lighting, stage manager, digital technician and actors. We believe it is essential to give women creative opportunities and vital for us to tell our own stories faithfully. I am the writer of ‘S.O.E.’, Nicholas Collett is Co-Producer and Dominique Gerrard is the director of the piece, Cat Alchin is our lighting designer. We are a Hastings based company and we have all worked together before on other projects.

S.O.E is a play about the outstanding contribution of two WW2 women of the Special Operations Executive – Vera Atkins and Noor Inayat Khan. Faith, fortitude and courage only begin to describe their extraordinary qualities.

These women were not British citizens but essentially refugees. Vera Atkins was a Romanian Jew and Noor Inayat Khan was a French citizen of Indian heritage. They fled their war-torn countries and pledging their allegiance to Britain, agreed to fight for a free Europe. The play is dedicated to telling their story and placing these remarkable women, front and centre of the piece, driving the action.

We are proud and honoured to be in partnership with The Bridges Programme as we passionately believe in its mission to support the social, educational and economic integration of refugees, asylum seekers, migrants, and anyone for whom English is a second language. History has shown us that such people make a vital and extremely valuable contribution and we would be severely diminished as a society without them.

We have just completed an ACE supported, twenty-date tour in the south and ‘S.O.E.’ was published by Methuen Drama at the end of May. We are now looking at opportunities to reach the rest of the UK and to tour the play internationally.

I have these recommendations for this year’s Edfringe:

‘Room’ by Heather Alexander Theatre – A bold adaptation of Virginia Woolf’s iconic A Room of One’s Own. This show stars the fantastic Heather Alexander who gives an exquisite performance as Virginia Woolf. It is directed by Dominique Gerrard (our director for S.O.E) and has received rave reviews during its tour. Pleasance Courtyard, 11.40 am (3-16 August & 18-27 August)

‘Prejudice & Pride’ – This new folk musical comedy reimagines Jane Austen’s classic novel in modern America with gender-swapped characters. I have not seen this show, but I have read the fabulous reviews and I will be taking my daughter who is a die-hard Austen fan in any form, whether its in bonnets or with zombies. I have heard the songs are fantastic – we can’t wait! The Space Triplex-Big 22.00 (5-27 August, not 8 &9)