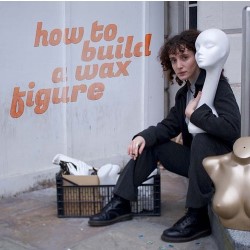 “Whenever we tell people we’re going up, they respond by either literally squealing with excitement, an involuntary shudder, telling us to pack a bag full of vitamins, or unveiling a parchment scroll of their favourite street corners.”

WHAT: “Girl meets anatomical wax sculptor. Anatomical wax sculptor meets girl. They fall in love. Or something like that. Bea’s older neighbour was her first love, her first cigarette, her first prosthetic eye. When Bea is invited to the Wellcome Collection to speak about her expertise making glass eyes, she finds herself unable to untie Margot from all that she does. As she tries to unpack her mentor’s effect on her work, Bea must dissect for herself what love really looks like.”

Yes, this will be the first time in Edinburgh for both Nell and me. We’re really excited to be up there, and get to experience firsthand all the Edinburgh lore. Whenever we tell people we’re going up, they respond by either literally squealing with excitement, an involuntary shudder, telling us to pack a bag full of vitamins, or unveiling a parchment scroll of their favourite street corners. We’re really excited that we will soon be a part of that now.

Also, my Scottish grandmother is absolutely thrilled and convinced that I’ll be converted by the charms of Edinburgh and move out of England.

I was supposed to take a show to the Fringe in 2020 that was obviously derailed due to pandemic. Since then I’ve learned that bringing twelve enormous moth puppets from the States to Edinburgh Fringe was probably not my best, nor cost-effective, idea.

Alright, but really, I feel like a big learning over the last few years has been accepting that things probably won’t go to plan, and that that is just part of the process. That one has been harder to learn, but important.

This play is really about how we mould each other (ha ha – wax sculpting, get it?); that people in our lives sometimes weave in and out, leaving behind these huge impacts on who we are. And I think maybe that’s not such a horrible thing.

Through our first staged reading at the Golden Goose in London, to the sadly cancelled VAULT festival, to restaging for a preview run up at the Pleasance, this play has been shaped by so many incredible creatives.

Writing the first draft in deep, dark Covid times in Oregon, I could never have imagined the incredible people this play would bring into my life. I met our brilliant, sensitive director Nell from a mutual friend on Zoom. We both moved to London amid pandemic, and decided to workshop ‘wax figure’ a bit. Now, here we are.

Y’all. I don’t know how people do this. The list of incredible shows I want to see is so long. Does anyone blink, let alone sleep, for the entire month of August?

Theatre-wise, I’m really excited to see ‘Hungry’ at Roundabout, ‘Caste-ing’ with Nouveau Riche, ‘Speed Dial’ from Spies Like Us, ‘Happy Meal’ by lovely Tabby Lamb, and so many more. Also, I’m pumped to see the wonderful comics who performed at our big cabaret fundraiser in June — Jo Griffin, Diane Chorley, and Celya AB. Just fabulous people (and the cherry on top is they’re all incredibly talented).