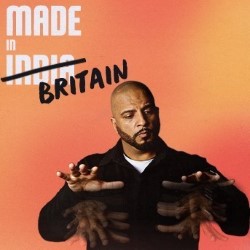 “I had an opportunity to go over things what I wanted to do in my future; It was a period that really shaped my current work.”

WHAT: “Since leaving home in Birmingham, Rinkoo Barpaga has been determined to find somewhere to settle. Along the way he’s encountered racism, discrimination and has begun asking himself: ‘Where do I belong?’ Join him as he delves deep into past experiences in order to discover his true self and a place he can finally call home. Performed by Rinkoo in British Sign Language, with live voiceover provided by an actor. Supported by the Pleasance’s Generate Fund. Directed by Tyrone Huggins.”

It’s my first time going to a fringe and performing in one – I feel like I’m going to the World Cup! You want to do your best and I want to showcase the best of what I can do. It’ll be a very interesting experience for me because I have had to use my physical performance skills a lot growing up in the deaf community. I’ve relied a lot on body movements and facial expressions. Having the chance to perform using aspects of languages has been very informative for me.

In terms of what makes a great festival, this feels like a bit of a trick question.

For me accessibility, is a huge thing. BSL isn’t a foreign language and I think it’s a shame it gets treated like one by not getting taught in mainstream schools.

I think the biggest thing I’ve learnt was in lockdown, as it gave me the chance to reflect. It gave me a lot of time to look back on my life, on everything that I’ve done, what my thoughts were about the past and what they are now. I had an opportunity to go over things what I wanted to do in my future; It was a period that really shaped my current work.

The show is about finding a home that I still haven’t found. I have an amazing team that helped me write this performance all based on my life story.

It started coming together when I was at Birmingham Rep doing a one year foundry course. You learn to develop your work about theatre making everything to do with performance. I performed an iteration of the show at The Rep, The Midlands Art Theatre, Camden People Theatre and Crystal Palace Festival.

I have no clue what will happen afterwards but I would really like to perform around the UK. Here, compared to abroad, we have a lot of great deaf actors. We’ve got a lot of good stuff and I would like to be able to perform abroad and show deaf people in other countries what they can do.

Block’d Off because like my show it’s based on real stories and real lives, exposing what it’s like to be working-class in London today. Rapsody is also one to look out for because it’s a young Birmingham based company that’s bringing rap, trap and drill music to the main stage. Looking at the programme at Summerhall and Pleasance My Voice Was Heard But It Was Ignored and Rajesh and Naresh have also caught my eye.