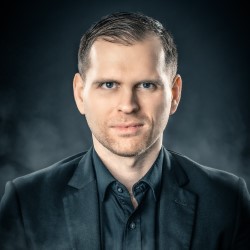 WHAT: “Watch in awe as quiet man Nick Everritt establishes a comedic persona and performs a series of jokes. Featuring perfunctory crowd-work, a series of ice-breaking gags relating to his physical appearance, a lengthy Tinder bit and an obligatory emotionally resonant finale. ‘Those in search of the truly alternative, look no further’ **** (One4Review.co.uk). ‘A droll, witty and very self-conscious deconstruction of comedy… Expect to see more of him’ (Chortle.co.uk). 3rd place, South Coast Comedian of the Year 2020/21. Finalist: Max Turner Prize 2020, Sketch Off! 2019, Get Up Stand Up 2019, Laughing Horse New Act 2018.”

WHERE: Paradise in The Vault – The Vault (Venue 29)

This is my third Edinburgh run. I did a split bill in 2018 and my first hour in 2019. It was at the 2019 Fringe that I learned that performing an hour of niche meta anti-comedy to an audience of 3 in a sweltering cave isn’t always a recipe of success. I’ve therefore designed my current show to be more accessible by featuring more so-called ‘jokes’. I hope to achieve a lower walk-out rate this time around. (It was 9% in 2019).

Nick Everritt: Quiet is a parody of an Edinburgh hour. On paper the show is about shyness and how I’m trying to overcome it through comedy, but in truth the theme of shyness is only there to provide the illusion of structure and dramatic heft. In the show I establish a shy and creepy comedic persona and then perform a series of jokes. These jokes alternate between conventional jokes which are good because they’re funny, and jokes which are so bad they’re good because they’re not funny, but that’s what makes them funny.

Is the show good? I don’t know because nobody came to my previews. But each joke has worked on multiple occasions in the mics, pubs and clubs of Greater London and rural Kent.

Ted Hill: All The Presidents Man. I normally have a visceral hatred of PowerPoint shows but this one’s really good. Aside from that you should seek out the weirdest shows you can. Watch the one-woman King Lear where she’s dressed as a flightless cormorant for no reason. Seek out the mentally ill out of work actor trying to convince a Chinese tourist in the audience to eat cress out of the small of his back. The golden rule is this: the worse the show, the better the anecdote.