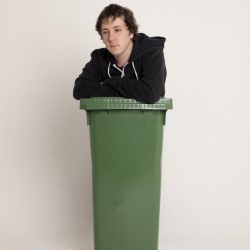 WHAT: “Fresh from BBC Radio 4 (Tom Mayhew is Benefit Scum), critically acclaimed comedian Tom was planning to write a show that’s less frustrated, less political… the cost of living crisis screwed that. ‘It is genuine, powerful, political stuff. These are four stars for a voice that should be heard more. Four stars for comedy shining a light on some grim, unjust places.’ **** (Scotsman). ‘Mayhew is passionate, articulate and – above all else – hilarious. His jokes are punchy, sharp and forthcoming. Despite the often weighty subject matter, laughs are never too far apart’ **** (Skinny).”

No, I came to Edinburgh for the first time 10 years ago! It was a festival I had dreamed of coming to purely by hearing how highly so many comedians spoke of it, and as soon as I came for the first time back in 2012, I was hooked. It’s one of my favourite months of every single year, as you see all your mates, get to see lots of shows, and you are in a beautiful city. If I didn’t have to worry about ticket sales, it would be the dream month for me!

It’s written by me and produced by Objectively Funny, and it has been previewed all over the country before Edinburgh. Whether it goes elsewhere will depend on how well the Edinburgh run goes, to be honest! But I’m hopeful we might be able to tour it.

Laura Davis should already be on their list of shows to see. She has been consistently excellent for years, if there’s any justice then she’ll sell out, so get your tickets quick.

Sian Davies is doing her debut show, and it is incredible. There is so much heart and proper laughs in there, I can’t recommend it enough.

Finally, Adele Cliff has been one of the best joke-writers at the Fringe for years, and she’s put together a fantastic show for 2022. It’s jam-packed with great jokes and astute observations, and it’s pretty much a guarantee nowadays that you will see one of the “Dave’s Top 10 Jokes of the Fringe” nominees in there!