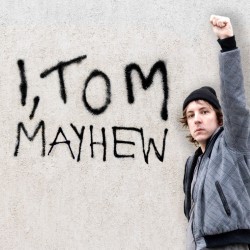 “There’s so many of us that were treated badly for a situation that was the fault of a previous generation, and I want to stand up for those people.”

WHAT: “Tom Mayhew (BBC New Comedy Award semi-finalist 2018) was unemployed for three years from the age of 18. This is a story of rejections, the JobCentre, being working class, and fighting for your place in the world. With lots of jokes. This show explores what its really like for someone in their twenties in 2019. While some seem to think we have it all, the reality is that many of us can’t afford to move out of our parents’ place. ‘His content is from the heart; spellbinding, raw and telling… a genuine joy to watch’ (Kate Copstick).”

WHERE: Just the Tonic at The Mash House – Just the Bottle Room (Venue 288)

It’s not – 2015 was my first year as a performer, in a guest role as President Obonjo’s “white butler”.

In 2016, I was part of a two-hander with Adele Cliff, in Adele and Tom’s First Birthday Party. It was in a marquee tent that had no soundproofing and flooded numerous times over the month. We wore party hats and it was a laugh, though.

2017 was the year that I took my debut hour up to the Fringe. I feel like acts with big agents or a lot of money behind them see their debut hour as them “arriving”, but my show was self-financed by my £7-an-hour job at Sainsbury’s, so it was more for me, to prove that I could do it.

I didn’t bring a solo show to Edinburgh in 2018, because I couldn’t afford it. I did, however, take part in a compilation show called Best In Class, where all of the acts were working-class comedians. It was a lot of fun, and it felt like quite an important thing to be a part of, considering how difficult it is for comedians from poorer backgrounds to finance their own shows.

I have written for The News Quiz a couple of times in 2019. When I was growing up, my Mum worked for Boots and my Dad did various manual labour jobs, so for me to be getting paid work at the BBC… it was honestly something that felt worlds away from my normal life! I was so excited to see where the news takes place, to have a pass that said “BBC” on it, to be working on a show that I listened to before I had ever performed comedy… It was a really lovely feeling, and I hope it becomes a regular thing.

My show is called I, Tom Mayhew: it is a show about my experiences of growing up poor, being on benefits, and the stigma that comes with it. I wanted to write this show because…well, when I, Daniel Blake came out in 2016, I cried. Not because of the film – I didn’t actually watch the film until a couple of years after it was in cinemas. I cried because it felt like the first time I had seen someone show my experience of being on benefits, of being completely skint in the 2010s, of what it is like for people at the bottom.

My story is different from that film, of course, because it is that of a person in his 20s – part of a generation that experienced record levels of unemployment. There’s so many of us that were treated badly for a situation that was the fault of a previous generation, and I want to stand up for those people.

The show is produced by Objectively Funny, who have been described as “the art-forms cutting edge” by The Guardian.

It is being directed by Olivia Phipps, who was a production secretary on Detectorists, and is an award-winning producer.

If they enjoy my show, then they will enjoy shows by some of these working-class comedians at the Fringe:

Sian Davies is hosting Best In Class again this year, and she has some of my very favourite acts taking part in Jordan Gray, William Stone and Hannah Platt.

James Meehan is an incredible comedian – his show in 2018, Gaz, was my favourite show of last year’s festival, so make sure you catch him.

Bethany Black isn’t at the Fringe this year, but her show in 2018 made me laugh more than any other, and it was a close second, just behind James’ show. So follow her on Twitter anyway, and see her when you can.

Lauren Pattison is only doing one date, so if you are reading this in June, I suggest you book a ticket right now – unless she’s already sold out. But she will sell out. She’s quality.