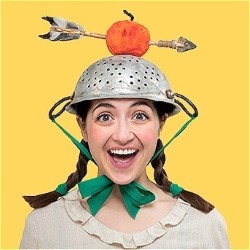 “As a promoter, you come because Edinburgh is the greatest showcase of live entertainment in the world and it has always been essential to be here for your work to be seen.”

WHAT: “Inspired by tales of Sir Lancelot and Robin Hood, plucky heroine Will Tell disguises herself as a knight and rides off on a chivalric quest to rescue her freedom-fighting dad from Baron Boris’s deepest darkest dungeon. Will knows how to stand up to tyrants but nothing has prepared her for when Boris’s daughter Edeltraut falls madly in love with her and wants to be rescued too. Madcap physical comedy with capers around castles, damsels in distress, a jaw-dropping joust and lots of original catchy musical numbers.”

No, my first time was in 1979 and I’ve been coming ever since. Not every year but whenever we had a new play or when we were on the lookout for shows to bring to our venue Komedia in Brighton. As a promoter, you come because Edinburgh is the greatest showcase of live entertainment in the world and it has always been essential to be here for your work to be seen. Let’s hope it is the same this year.

How fragile life is and how we shouldn’t take anything for granted. But also a reminder of what joy live performance can bring to us all and how much we missed it these past three years.

Our new play is a mad-cap comic adventure with capers around castles, damsels in distress and even a jaw-dropping joust to the death on life-sized horse puppets mounted on bikes. We started working on it in 2020 at a time when democracy and liberty seemed particularly under threat and chose to base it on the legend of the great Swiss freedom fighter Wilhelm Tell – of shooting an apple off his child’s head fame – something which had never been done before in English-speaking theatre. In our play, this child is Wilhelm Tell’s daughter Will and the play tells how she rescues her father from th Baron’s deepest darkest dungeon. And the Bad Baron? Well, it was a toss-up between calling him ‘Donald’ or ‘Boris’ and Boris won because of his comic potential. Theatre Fideri Fidera is an Anglo-Swiss repertory touring company. We work and create together and we have performed in over 150 venues around the UK ranging from the Lowry to many a village hall. And post-Edinburgh? After five years on the road we are taking a breather before touring Will Tell in autumn 2023.

When we have a new play we hardly have time to look at what else is on until after we open the show. But I have heard great things about Leonardo! A Wonderful Show About A Terrible Monster at Underbelly. And if the fringe is getting too much I would also advise you to visit my old Edinburgh friends: the Meadows at sunset or early morning or wander through the trees at the Botanical Gardens. Both will be perfect preparation for your next Fringe show.