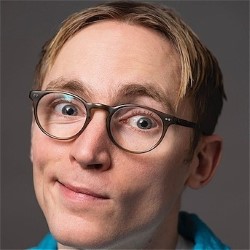 “If you’re ever bored at the fringe just walk 10 metres in any direction and you won’t be bored any more.”

WHAT: “Shropshire’s worst writer pulls on his socks and sandals, irons his shell suit windbreaker, combs his curtains, and leaves Shropshire for the fifth time in his life to bring his fifth show to the Edinburgh Fringe. As seen on 8 Out Of 10 Cats Does Countdown teaching Suzie Dent about the English language. ‘This is how character comedy should be done’ **** (Chortle.co.uk). ‘Deliciously Fun’ (Guardian). ‘One of the best character shows we’ve seen for a long time’ (Comedy.co.uk). Warning: This show contains scenes that some viewers may find extremely nice.”

WHERE: Pleasance Courtyard – Beneath (Venue 33)

This is my 10th time performing at the fringe, but each time always feels completely new. As a performer it’s a bit of a knife-edge and will either be the best month of your year or the worst month of your life, depending on how your show’s going. As a punter it’s just incredible. If you’re ever bored at the fringe just walk 10 metres in any direction and you won’t be bored any more. And if you haven’t been before, drop everything and just GO.

During the pandemic I was living in the countryside, instead of my usual London, and I learnt that the country way of life is delightful and infinitely better than living in a city. Peaceful walks, birdsong, beautiful sunsets, serene and relaxing afternoons in the garden without 60 people looking into your tiny outdoor space (if you’re lucky to have any at all). Have I absorbed the lesson yet? Absolutely not. I moved straight back to London as soon as I could and can’t imagine living anywhere else. What a pathetic little city rat I am.

‘Christopher Bliss: Captain Words Eye’ is a character comedy show about the worst writer in Shropshire. Christopher’s last three shows have seen him tackle novels, theatre and film, but this year he has found as many new forms of writing to butcher as possible: poetry, journalism, children’s books and more. It’s an extremely silly, feel good show about self-confidence told through the lens of a passionate deluded rural oddball, and happiest air-head the world has ever seen: Christopher Bliss. Written by me, produced by Berks Nest, premiering in Edinburgh, and afterwards is tbc but probably touring it in 2023 around the UK.