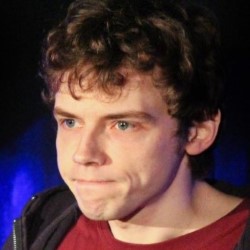 “I genuinely think the Fringe is the best place in Britain to see stand-up. You’ve got to see the right show though. (The right show is mine).”

WHAT: “Real reviews for Tom Little: ‘He’s the real deal. An instinctive comedian with oodles of charm and a quirky, frenetic intensity…. If he cuts his energy levels by 10 per cent he could end up in movies’ (Spectator). ‘Inventive, unexpected and often very silly… can’t remain a hidden treasure for long’ (Chortle.co.uk). ‘His elevation to TV panel show favourite is surely only a matter of time’ (TheWeeReview.com). ‘A huge talent’ (Scotsman). ‘An unashamed crowd-pleaser’ (BeyondTheJoke.co.uk). ‘Gut-wrenchingly funny’ (FringeReview.co.uk). So there. Beat that!”

I’ve performed stand-up comedy at every Edinburgh Fringe since 2015, which is why I’m so famous and rich now. I come back every year because it’s great to be able to perform so many times in one month without having to drive anywhere. Also you get a different kind of audience. Audiences at the Fringe tend to be more open minded and attentive, which makes the comedians more creative and ambitious. I think that makes for a better show for everyone, so I genuinely think the Fringe is the best place in Britain to see stand-up. You’ve got to see the right show though. (The right show is mine).

I think the pandemic destroying all our plans and changing our world overnight was a big lesson in coming to terms with the random unfairness of life and accepting how much of our own existence is outside our control. Also, I learned what TikTok is.

It’s a stand-up show so it’s all written by me. It’s one long story about an absurd misunderstanding but I’m not going to reveal anymore than that. I think it’s the funniest thing I’ve done. I previewed it around the country before the Fringe started and everyone who’s seen it agrees that it’s humanity’s greatest achievement. I keep saying ‘Don’t be daft. It’s not THAT good’ but they insist ‘No, really Tom, it is!’

Off the top of my head I heartily recommend Eric Rushton, Sooz Kempner, Gary G Knightley, Harriet Dyer, Stuart Goldsmith, Chris Cantrill, Joe Wells, Faye Treacy, Rob Copland, Dan Tiernan and Mark Grimshaw because they’re all funny comedians and none of them have done anything to get on my bad side (that I know of).