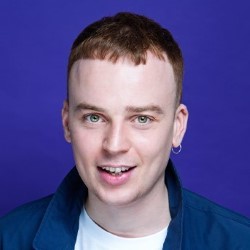 “I’ve learned it’s not much fun working at your kitchen table all day and not seeing your mates so I am pleased with our restored freedoms.”

WHAT: “How far would you go for the people you love? Join Soho Theatre’s Young Company alumni, rising comedy talent and naïve suburbanite Jake Farrell as he answers that question in his highly anticipated debut hour about family, the future and Stevenage. ‘Jake is a natural… this is a nuanced exploration of youth, half-hearted liberalism, family ties and artistic expression’ **** (VoiceMag.uk) As heard on Penguin Random House’s Edinburgh Fringe Unlocked.”

This is my first time doing a full hour show and I’m really looking forward to it. It’s a completely mad atmosphere and as a comedian trying to build a profile it’s a completely singular experience – you pitch up and people come and take a chance on you. It’s incredible. I love being here to see other people whose shows I’ve seen develop throughout the year and also stuff that’s totally new. I love that mix as it brings comedians from different cities around the world together. I try to mix being a punter with doing my show well every day.

I’ve learned it’s not much fun working at your kitchen table all day and not seeing your mates so I am pleased with our restored freedoms. I missed comedy as well so I guess I learned the place it had in my life. Hopefully though I’ve been able to attain a bit more balance between doing comedy and the many, many important things there are in life. I’ve also learned that Guiness in a can is actually palatable.

My show is called Sky and it’s about moving back to Stevenage and love and commitment and also Deliveroo. There’s also a bit of a twist that explains the name but you’ll have to come along to find out what that is. It’s produced by Berks Nest which is really cool because they’ve put on loads of shows that I have loved at the Fringe before. I’d love to take it to other cities after the Fringe or at least do a small London run but we’ll see how this goes first.

I’ve watched Jack Harris’ show Teaching Teachers how to Teach develop into a completely daft and intricate piece of multimedia comedy over the year and people should definitely see that. Rajiv Karia is also someone I love watching and his show Gallivant is full of memorable, askew lines so I’d recommend that. Beyond those two I also saw Chelsea Birkby do bits of her show No More Mr Nice Chelsea (great name) earlier in the year and they were fantastic so I’m keen to see the whole thing. Someone whose show I’ve not seen but I always think is class is Pierre Novellie so I’ll definitely be watching that and I also really like the duo Shelf so go and see them too.