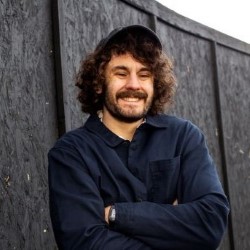 “I love the festival even though I’ve never objectively had a good one, this is going to be different though.”

WHAT: “Safe everyone. English Comedian of the Year winner and star of Comedy Central Live and Dave’s Hypothetical. Tour support for Joe Lycett and ‘almost certain future star’ (Chortle.co.uk), Josh takes us through the past two years of his life, trying to have a baby and accidently losing Captain Tom’s birthday cards in his own unique and hilarious style. Amassing over three million views on his Twitter videos and regularly headlining the biggest clubs in the country Josh is ready to f*ck shit up this Fringe (as a friend).”

Pfft do I look like a rookie to you? There’s nothing this city can throw at me that I haven’t seen a thousand times over *draws on cigarette*. Nah, it’s my fourth time, I love the festival even though I’ve never objectively had a good one, this is going to be different though *throws cigarette on the ground and stamps it out*. I think the things that make a great festival are the bars, the food and the shows *notices there’s still some cigarette left so picks it back up*. I’m really looking forward to it.

Just that none of it matters so enjoy it. I also learnt that YouTube Yoga videos are largely ineffective if you’re also drinking 8 cans of lager a night.

It’s a stand up show, I wrote it, it’s on at Monkey Barrel which I’m really excited about, previews have gone well and I’ll perform it everywhere after, Coventry, America and, if I can pull it off, Bristol!

Sean McLoughlin is amazing, I also love Lou Conran. Red Richardson is sat next to me right now, so I’ll say him, Good Kids, Celya Ab and Eric Rushton for some midland vibes. My guilty pleasure is university A cappella groups.