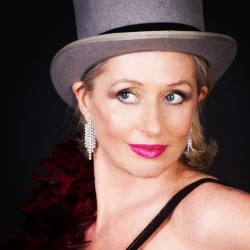 “Living in Soho in the 80’s like saying you were in Berlin between the wars. My life was non-stop carousing, singing and parties, mostly at The French House and The Coach and Horses and clubbing at Kinky Gerlinky and Taboo.”

WHAT: “In her fabulous new show The Working Girls of Soho, Josephine Pembroke, creator of Pussies Galore, the infamous club act of the 1990s and darling of the iconic Café de Paris, Heaven and the Hacienda Club, celebrates the West End’s glorious and notorious past. Be introduced to Ma’ Meyrick, the 1920’s Queen of the Night Clubs, the legendary all-female crime syndicate, The Forty Elephants, Aristocratic Annie and Sadistic Cindy in a cabaret of sparkling storytelling, characters, sentimental torch songs and saucy show tunes from the roaring 20s to the funky 70s.”

I arrived drunk in Edinburgh for the festival in 1984, I came on my own on the train and hit the tinnies, a party evolved, this experience was going to be FUN. I lived in Soho at the time and one of my drinking buddies was Robbie Coltrane, so I hung out at his flat in Leith and saw his show. I remember being completely mind blown by Edinburgh, it was just so exciting, all the shows were on the edge. And it all seemed quite simple, you could be just one person, in a theatre, performing and that has always been my aim. A one woman show. So I am beyond thrilled to be performing my show At Edinburgh Festival the biggest arts festival on the globe! Woop bloody woop!

After 27 years of a rocky (who’s isn’t)? marriage. It’s all over I am getting divorced I am now totally alone for the first time in my life. The divorce, this insanely different life has shook me up. I needed to get back on stage and tell stories and sing. I sat next to a performer at dinner and he suggested looking at my life, and go from there. Ta Da! An eureka moment, how about my time living in Dean St in Soho in the 80s?

Now was the time to put all those years of experience to good use. I realised that I had all the material to do a show about Soho and its people, but especially about the women who drove the neighbourhood; women who were independent, who had risked being outcasts and weren’t afraid to capitalise on the men with money it attracted. I had lived it and now just needed to piece it together in a format that could work on stage.

My formula is straightforward: I tell stories of the characters who dominated the scene, place them in historical context and add some of the big songs of the period. What do you have? The Working Girls of Soho – Saucy Tales of Notorious Women.

And it feels really good to be on the stage alone, in charge of my destiny once more. Damn the smug marrieds, damn my age, damn the critics. I am at it again, funnier and sexier than ever, I am back, come and see me!

Living in Soho in the 80’s like saying you were in Berlin between the wars. My life was non-stop carousing, singing and parties, mostly at The French House and The Coach and Horses and clubbing at Kinky Gerlinky and Taboo. Soho in the 80s was still seedy and I evoke this in my show. I will tell you about the outlandish, self supporting females who made Soho happen. I talk about the working girls, the whores, the thieves and the nightclub Queens, I sing naughty, funny and moving songs about bad women of loose moral character. What’s not to get excited about? Come and join me for some louche relaxation, for an hour, firmly dedicated to fun. I have performed the show in Soho a few times before Edinburgh and I aim to go global with it!

More Than Tracy Turnblad, funny feminist cabaret.
Take it Away, Cherly about a kissing booth.
Meg is playing God at Ed Fringe 22, addiction and mental health.
THE BEATLES WERE A BOY BAND, exploring women’s safety.
BeautifulNothingPlay, against women in online spaces.
Bathroom Confession, confessions in the bathroom.
Cecil Beaton’s Diaries, fabulous diaries of the master of image.