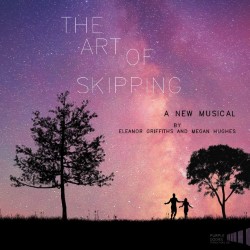 “The Scottish Theatre scene is a beautiful and thriving one, it feels like the festival all year round.”

WHO: Eleanor Griffiths, Writer and Director

WHAT: “‘Never been afraid of the dark, only curious for the spark.’ Alex Peel is a young and bright astronomer, destined for a life in the stars. Then Alex’s life is turned upside-down. Alex is going blind. After working all her life for this big moment of freedom, for her eyes to be opened and released into the mysteries of space, the windows have been shut firmly over her eyes. Follow Alex in understanding whether our destiny is written in the stars and if sometimes there is more to life than in front of our two eyes.”

This is my first time taking a show to Edinburgh. I was fortunate to have done my drama school training in Scotland so was able to venture to the Fringe many times while I studied there. The Scottish Theatre scene is a beautiful and thriving one, it feels like the festival all year round. I feel very privileged to have been able to grow as an artist up there.

I gained an iron and ironing board after all these years, it turns out my mum is right, your clothes do look better when they have been de-crinkled.

The musical’s story was created by myself with music by one my closest friends – Megan Hughes. The story was imagined after a particularly tough few years where I learned I had an asympotmatic lung problem, that if left untreated would probably kill me. This meant that one of my lungs had to be removed in an incredibly intensive and invasive surgery. For a young person on the brink of finishing her training as a musical theatre performer and someone who relies heavily on their voice and pulmonary stamina it was incredibly daunting.

To help me get through these challenges I began writing. I desperately wanted to build a life around the arts and at that moment the only thing I had the strength to do was to pick up a pen and write. I began thinking about other vocations in life where parts of your body are a seemingly necessary tool to be able to build a career in it. I also enjoy reading popular science books, in particular physics – I read a lot while I was in hospital! This is a joy that has been passed on to me by my dad and I have always wanted to combine the two worlds of musicals and physics. Another factor in creating The Art of Skipping story is that I had also been dealing with problems with my eye-sight for a long time and blindness had always been one of my biggest fears. I was then posed with my question for writing “How does an astronomer see the stars if they cannot use their eyes?”

From here The Art of Skipping was created, it’s a heart-warming musical about an astronomer, Alex, who has always kept her head in the books but her eyes on the skies. She has a bright future ahead of her. But just on the brink of finishing her degree in astro-physics she is given the news that she is going blind. It’s her biggest challenge to date and sends her spiralling out of control in a bid to see everything before she can’t see anything at all. From fear that she will never be able to pursue her dreams of becoming an astronomer, the panic sends everything she truly loved out of focus. But with the help of her mum and partner Jay they encourage her to use this as an opportunity to see the world from a different perspective, just like we do as children skipping across the park, with the world at our feet.

I am producing it with my own production company Purple Doors Productions and heading to Edinburgh with a team of four other brilliant women, who have helped shape the story into what it is today. We took it to the Theatre in The Fields festival in the summer last year and have had a successful preview at the Kings Head Theatre in London already. After the fringe we hope to take it on tour. The dream would be to perform it under the stars in some of the countries fabulous open air theaters.

Go see as much as possible across all the different genres showcased at the festival. The beautiful thing about Edinburgh Fringe is the abundance of perspectives you can be challenged with and the questions you come away with asking.

I piece of physical theatre I saw recently called Identity by CTC company is one I’d definitely recommend as this continues the questions and understanding of who we are outside the parameters of our own body.

I also recently heard about a new play while at an Edinburgh Fringe conference called Algorithms. It’s about loneliness in the online world

And if you like space stuff and musicals there’s another new musical out covering these themes at the fringe called Space Junk by Slipshod theatre which I’ll definitely be heading to this year.

“It all started once I began to write down the stories of my interactions with my clients.”

WHO: Katie Kopajtic, Your Role in the Production: Writer, Actor, Producer

WHAT: “From New York City, Katie Kopajtic makes her international debut. She’s always had a love/hate relationship with personal training thanks to the entitled, bratty, bitchy, f*cking insane, totally helpless, utterly incapable clients who have stolen her heart. This show is a behind the scenes look at the luxury fitness world and the unconventional relationships that blossom within it.”

It is my first time! Now that we are sub-20 days away, I have begun to practice diaphragmatic breathing.

Confessions of a Personal Trainer is a show written about my survival job at a luxury fitness center in New York City – Equinox. It has one producer, one performer, and one writer (me!) Once I cobbled together a script I enlisted the help of my friend and comedy wizard Amanda Rothman to come on as director and help shape it for the international stage.

It all started once I began to write down the stories of my interactions with my clients. After workshopping it around New York City it premiered at The Tank’s Pride Fest last July. I cannot yet reveal where it will go post-Fringe, as there may be legal issues with my workplace. I am still employed under Equinox, and I am admittedly playing with fire by not censoring the company’s name.

SHOW UP by Peter Michael Marino. I saw it. It is incredible how he improvises a different show every night based on what the audience gives him.