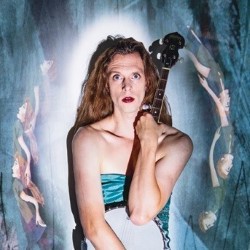 “This is a tech-heavy, content-rich show, delivered with a light and graceful touch.”

Walking from EH10 to Zoo venues is a very pleasant experience. For once this rainy auld EdFringe the sun is shining. The people smile and say good morning. The mood music is what would happen if you were to shut Sir Harry Lauder and Ronnie Hazlehurst up together in a telephone booth and not let them out until they’d written something smile-inducingly pleasant. The gentrification wave that swept through EH9 before and after the crash has receded somewhat, but the shops and eateries are busy as well as interesting. Amble further down towards Northbridge and you start feeling as though you’ve arrived in EH91. Friends on the terrace at 86 Princes’ Street have their views, as do pals browsing the shelves at Lighthouse books. If there’s any agreement between them, which is doubtful, they might all conceded that people are less in their own space and more in your face the further from villadom one travels.

In their deeply personal, moving, and thought-provoking polemic, the poet and banjo wielder, Edalia Day, spends the hour describing what it is like to live day-to-day constantly menaced with aggression from randoms, both online and in the street. A lot has gone into this show. A lot of heartache and soul searching, a lot of personal discovery and revelation. “I didn’t escape from one box only to be forced into another.” You come for the social commentary, which is lucid and insightful, you stay for the video-projection, which is (as promised) kickass as well as for the finely tuned performance which shows no sign of flagging as EdFringe enters the home stretch. This is a tech-heavy, content-rich show, delivered with a light and graceful touch.

At a time when transgender voices are finally starting to be heard, it seems amiss to attempt to filter or dilute Edalia Day’s message for them. What I can describe is the effect this show had on this particular cis white male determined to be a strong ally in this generation’s fight for inclusivity, understanding, and respect. I came away having been thoroughly entertained. This is a performer who knows their craft and that, as with all great polemics, it’s not just about the message or the messenger, it’s about the recipient as well.

“I’m transgender and have struggled with it for a long time but this year I really started to embrace it in a much more positive way than ever before and I’ve been vlogging the journey on Instagram.”

WHAT: “A comedy spoken word show about gender, the media and not fitting any of the boxes, full of explosive movement, original songs and kickass video projection. Edalia Day is a banjo-wielding, poetry-slam-winning, trans warrior, taking on the world one troll at a time. Too Pretty to Punch is a hilarious, inspiring and uplifting journey through everything you need to know about what it means to be trans in 21st-century Britain that reminds all of us (regardless of who we are) of the power of celebrating our existence. All shows include open captioning.”

I’ve been to Edinburgh many many times. I’ve been an actor for 14 years and producing my own work for 4.

I first came to Edinburgh with a production called Cannibal the Musical when I was 23. It was an incredible experience for me. I saw so many inspiring performers which massively shaped how I’d develop as a performer. These included the hilarious physical comedian Frank Woodley, from Australia, and the travelling physical theatre/circus company, Footsbarn. Their magical version of a midsummer night’s dream in their touring circus tent that they’re brought to the fringe opened my eyes to a beauty that’s possible in theatre that I’d never experienced before. It was that year that I decided to set my sights on going to study at Lecoq in Paris as well.

6 years later and fresh out of Lecoq I brought the first play I wrote here in 2014, called In The Surface Of a Bubble, a four-hander using masks and martial arts to tell the story of a world where anything you imagine comes true.

Since then I’ve been touring all over the UK with Super Hamlet 64, a version of Shakespeare’s most famous play in the style of a computer game, and last year I started developing Too Pretty To Punch, my piece on the way trans people are treated by the media.

This year has been a hugely transformative one for me, both in my life and as a performer. I’m transgender and have struggled with it for a long time but this year I really started to embrace it in a much more positive way than ever before and I’ve been vlogging the journey on Instagram.

I’ve also been getting mentored by a several producers and sharing my discoveries via social media.

Too Pretty To Punch is a comedy spoken word show about being transgender and the way the media is dominated by scaremongering stories about us.

I generally work by myself – producing, writing, animating and devising with just me and a camera in a room, then improvising away and then watching what I’ve done back to pick the best bits.

With Too Pretty To Punch I’ve branched out, working with a brilliant composer: Billie Bottle and 2 visual artists: B Mure and Jack Kelly to create amazing art that I’ve then gone away and animated, turning into projections that I interact with during the show. I’ve also got a brilliant stage manager, David Calder, who was originally my secondary school drama teacher.

I developed it in 2018 supported by Arts Council England, The National Lottery, Salisbury Arts Centre, The Shoebox Theatre Swindon, Trowbridge Arts, the ARC in Stockton, and The Merlin Theatre in Frome. I did a short tour followed by performances in Birmingham and Derby as part of Festival of Audacity by Beatfreeks and Come as You are Festival run by Camden People’s Theatre.

This year I’ll be doing two previews, as Buddhafield festival in Taunton, and the Alphabetti in Newcastle, and I’ll be doing a national tour from October 2019 to April 2020.

Burgerz by Travis Alabanza is a really interesting journey into the world of how to make a burger and how to avoid transphobia in the streets. I saw it at Liverpool’s Homotopia Festival last year and would really recommend it.

Manual Cinema’s Frankenstein is also a show I’m keen to see. I’ve been using a lot of video projection in my work since Super Hamlet 64 and I’m totally hooked in it and anything with animation in it. Also, I’ve just finished reading the book so it’s fresh in my mind.

I trained at ALRA, a year above Suzi Ruffell. She’s become incredibly successful as a comedian and I’ve never managed to see her shows so I’m really looking forward to catching Dance Like No One’s Watching. I was at Lecoq with Rhum and Clay and always enjoy their work so their War of the Worlds is one I’m keen to catch as well.

Badass be thy name by the police cops is another one I’ve been keen to see for a while.

Lastly, I just found out today that I’ve been chosen to compete in the BBC Edinburgh Fringe poetry slam that runs from the 12th to the 19th of August. I’ll be there every evening whether I get through the rounds or not as the quality promises to be immense.